OpenMetaMap is a proposed tool to enable linking different datasets with OSM data without real importing of data to OSM. Basic idea is that OSM database should have only pure crowd-generated original data, all external datasets should be somewhere else, but we still want and need other database data in the OSM rendering (collective databases).

There are several goods and bads of data imports.

There must be a way to fight against bads of imports while keeping as much as possible of the goods. It is to wash up the OSM from the non-crowdsourced data without flushing down the babe.

For example, I am the national association of museums, who has nice database of all the museums in a country. I want to share it to OSM community, and I also trust them enough to maintain it and so I also want to get back community edits. I could just import data and maintain it in two places (own database system and OSM) in parallel, but it would be way too much extra work for me, so in reality today I can import (donate) the data and leave it alone there. I will maintain only own database.

For this we need to: 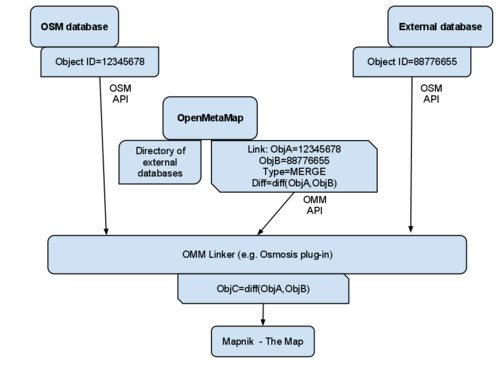 Link has also own history/metadata like OSM objects have: added, modified, version, added userid, last modified userid. Also (optional) version numbers for both ObjA and ObjB, so it is possible to detect external changes more clearly; if version number is not available then change detection requires deep object diff analysis.

Maybe Links should be combined to changesets, like OSM changes to have easier change management?

Who can edit links? Following OSM general style there is no anonymous editing of Links (everyone is authenticated), and also there would be no special rights in Link creation/editing/deletion. Anyone can merge the datasets. OMM software would be free and open source, so if someone wants to build more controlled/private link databases for in-house use, then we cannot stop it.

There are different levels how well could be external dataset integrated to OSM, from more simple to most advanced:

Some options here (e.g. read-write APIs) will be supported later, as they require more complex support in editors and other tools.

External data can be kept in:

Then for all used external datasets:

Result would be another standard OSM file which combines OSM and external data, just if it was imported and merged old way.

How not to use combined data

Some may have temptation to use OpenMetaMap Links as FIXME hints (from OSM point of view): if you see that there is EXTERNAL data better, then you take data from the external source and update invalid data in OSM. Or use MERGE tags to see differences to update automatically OSM data with a bot. But this way you actually import data to OSM, with all the bad (and good) consequences, therefore this should be avoided. In fact, data Linking, if done properly, should create no traces in OSM, and also in the external database. Of course there are cases where data update in OSM makes perfectly sense, then all import guidelines (check license compatibility, attribute properly etc) apply for the imported/updated object(s).

OpenMetaMap solution would enable to have live links to external databases, keep OSM database clean from non-crowdsourced data etc - basically solve all problems of imports what were listed above. In addition it would enable following interesting options:

There are many general open questions: would OMM it feasible, would anyone really use it (as donor and as maintainer of data), how, when and who could implement it, would it remain totally separate from OSM (technically also possible) or well integrated etc.

Possible solution: for any this kind of ambiguous editing user will get prompted where to save the contributions. Current JSOM saving in exit is also somewhat similar: it provides options to save edits to file and/or OSM, and asks to resolve conflicts if multi-user editing happens. Target is that the linking should be as transparent as possible in all OSM editors, so user just makes a simple fix (change/add tag, move point) and usually only OSM data is affected. This means that the OMM should be integrated to the editors.

Next steps and longer vision: