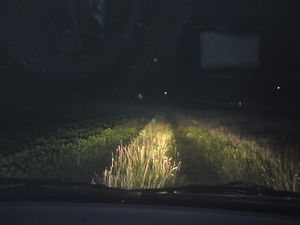 If you are going to a rail trip, get a fix before boarding. Once you get the fix, the ephemeride are valid for 2-4 hours and your receiver can get a fix in a matter of tens of milliseconds. This is valuable in harsh receiver conditions such as rail cabs. It can also help (though to a lesser extent) when travelling by coach or car.

If possible, map during night/early morning

With fewer cars on the roads, you will be able to go almost anywhere you wish, without being struck by other people. In some areas, you will even be able to stop anywhere without disturbing anyone, giving you enough time to take pictures or seek street signs and points of interest. However, avoid Friday and Saturday nights, as there are more car accidents at these moments (and there are reasons why). Finally, if you take photos with a digital camera, check a few of your first shots to see if the light is enough to make your shots actually useful. I do work at early hours, and i tend to leave home half an hour earlier than usual to try new ways to go to my workplace, making new traces at once. Note however that a car driving round a housing estate slowly in the early hours of the morning could arouse suspicion from others who don't know what you are doing there.

Alternatively use some tissue or toilet paper, you will need to experiment with the layers of paper to use so that the right amount of light gets through to the sign.