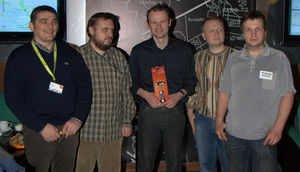 MOSCOW, RUSSIA - December 23, 2009 - Navigation software PocketGIS using map data by OpenStreetMap and online traffic information by Probkovorot shows the second result (2h45m) in the test organized by GPS-Club.ru. Seven navigation software companies participated representing almost 100% of navigational software market in Russia. The main objective of the test was to compare the effectiveness of the participating software’s capabilities of avoiding jams. It was required to drive a route in minimal time observing traffic rules and directions given by navigation software.

The first place (2h25m) with a significant advantage of 20 minutes has also been taken by PocketGIS guided by the map from local professional mapping company with support of Probkovorot's traffic information. The third place (2h52m) goes to TomTom with map data from TeleAtlas and IQ Routes technology. The rest places are distributed as follows: ProGorod (3h36m), Navitel (3h41m), CityGuide (3h47m), Garmin (5h37m), Autosputnik (6h21m).

"We have been developing and improving our technologies for more than 10 years. This deep and careful work has led us to such result" says VctOs, chief developer of PocketGIS/Probkovorot project. "The main advantage of our technology is ability to predict traffic congestion which lets Probkovorot users save time and fuel. Our practice shows that the ability to use OpenStreetMap in everyday driving with a high quality navigation software and traffic service leads to explosive improvement in OpenStreetMap routing graph. It takes just a few months to make OpenStreetMap routing data in Moscow region suitable for automobile navigation."

PocketGIS navigation software project was published in 2006. Probkovorot project is focused on developing unique and advanced methods of traffic data processing. OpenStreetMap data in PocketGIS format have been published regularly since Q3 2009 and in November 2009 Probkovorot began broadcasting online traffic congestion data for OpenStreetMap. Since then popularity of PocketGIS with OSM data has grown considerably leading to a surge of map corrections in Moscow region with help of PocketGIS and Probkovorot methodology. Some say that as a result today's OpenStreetMap routing data in certain places of Moscow region already superior commercial map data in accuracy. The next task in PocketGIS and OpenStreetMap enthusiasts' and developers agenda is to give the postal address searching capability in Moscow and then in other regions.