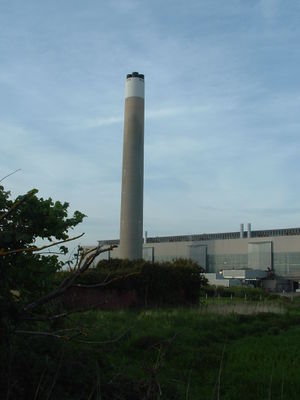 Sounds like a simple no-brainer to me(?). These are very obvious, whether in use or not. They make good navigation markers so a useful part of a map. Would the proposer identify themselves and move this along? MikeCollinson 16:54, 5 July 2008 (UTC)

Let's settle the most recent suggestions and then go voting. May I use the opportunity shamelessly to advertise a similar proposal for silos. Ipofanes 12:17, 11 February 2009 (UTC)

Perhaps allow node or area rather than just node. Some of the larger cooling towers, which I guess could also be tagged using this tag, are fairly large. --EdLoach 09:10, 11 February 2009 (UTC)

I'd be inclined to treat cooling towers differently -- they're not, strictly speaking, chimneys so we shouldn't mark them up as one. Jono 11:48, 11 February 2009 (UTC)

I would also like to be able to mark polygons as chimneys. For example, look at this aerial photo:

That's a chimney under construction in my city. 150 meters high. Why should I mark it as a node? Or, to rephrase the question, how should I mark the remaining polygon? --Jekader 18:03, 6 November 2010 (UTC)

I would think that type=flair_stack could also be used? in JOSM man_made=works also has a chimney stack in the icon, which might work too. --acrosscanadatrails 21:42, 27 March 2009 (UTC)

I have seen several freestanding chimneys where houses once stood years before (and presumably burned down). Should these also get the man_made=chimney tag or something else? This proposal seems to be for tall industrial stack chimneys. Perhaps these should use something like man_made=stack?--Elyk 00:32, 28 March 2009 (UTC)

+1 for man_made=stack as a replacement for this tag. The feature could include landuse=industrial --acrosscanadatrails 01:08, 28 March 2009 (UTC)
I think it should be mapped historic=ruins or like this, because it is not just chimney but stove with it and it is disused. This tag is already used (175 in tagwatch). --Vovanium 14:55, 12 February 2010 (UTC)

Not yet open for voting.