Fare zones are used to group a number of public transport stops or stations for simpler transit fare calculation. They are usually defined by the transit authority operating or managing the local transit network. Often, a station's fare zone is shown together with its name and servicing lines on its street sign. Depending on local customs, fare zones may be named by numbers or letters.

Where they are used, each station in a transit network is located in one or more fare zones. In the boundary region of two networks, fare zones of both transit authorities may overlap and different fare systems may be applicable depending on the destination.

Transit fares are usually based on the number of fare zones that need to be touched when travelling from the origin station to the destination station. Where available, the validity of transit passes may be restricted to a subset of fare zones.

Fare zones are an essential part of many public transport networks. They may be useful for travellers who want to estimate the range of a given ticket or pass, or the cost of a given journey. Once an area is entirely covered, the information may be used to generate nice overview maps of the local public transport network. (The author finds this basic information often unreasonably hard to find on the transport authorities' websites.)

There seems to be an alternative tag fee_zone=*. It is used on about 6 500 objects, but only about 95% of them seem to be public transport related.[2]

Some transit networks with fare zones: 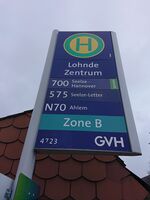 Two different tagging schemes are conceivable. The Property Model would simply add new tags to the existing public_transport=stop_area relations. Meanwhile, the Relation Model defines a new relation type to hold fare zone information. While the former has a lower footprint and is easier to understand, the latter is more generic and extensible.

It has to be decided, which of these should be retained.

Add the tag fare_zone=* to the public_transport=stop_area relation representing the logical station or stop. The value must be the short name (usually a number or letter) by which the fare zone is known within the transit network refered to in the relation's network=* tag. Use semicolons (;) to separate multiple values if the stop belongs to more than one fare zone defined by the same transit authority.

Use fare_zone:<qualifier>=* if the stop also belongs to one or more fare zones in a different transit network than that given in the network=* tag.

Create one relation for each fare zone in a transit network. Use the tags network=* and ref=* as identification. Add the public_transport=stop_area relations of stops and stations in this fare zone as members.

If a station or stop belongs to more than one fare zone, it should be added as member in each of these relations.