The content of this proposal has been archived to avoid confusion with the current version of the documentation. 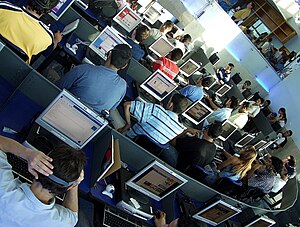 On the amenity=cafe page, the definition describes a cafe as "a generally informal place with sit-down facilities selling beverages and light meals and/or snacks."

However, the internet_access=* page says an "internet cafe" should be tagged as a "cafe". Historically, internet cafes often did indeed sell beverages or food, but this is not their primary business, and I don't believe they are properly classified as "cafes". (See also the discussion pages for Talk:Key:internet_access and Talk:Proposed_features/Copy_Shop, both of which make the same point.)

They are really different sorts of animal.

During discussion, it was felt that LAN gaming centres are also sufficiently different to be distinguished. I have not written a proposal for such a tag, but leave that to others. The discussion remains on the talk page.

There are already several hundred internet cafés in Taginfo.

If a place is truly multipurpose, you may use multiple nodes inside the area for each amenity. See Semi-colon_value_separator#When_NOT_to_use

amenity=internet_cafe would be the primary tag. Implied tags would be internet_access=yes, internet_access:fee=yes and service:computer=yes. Useful tags in combination would include:

As with the shop=copyshop tag, commonly used services would also be included, such as:

The amenity=cafe wiki page would need to specify that it should not be used for places whose primary business is the sale of communication services.

The internet_access=* wiki page would need to be corrected to refer people to this tag rather than the amenity=cafe tag for internet cafés.

It was approved unanimously with 19 votes for.