Used to mark the external limit of the military area, including forests, beaches... Consecuently, can be used with "military=*", "landuse=*", "natural=*", "amenity=*"... (not limitating list).

When a military base is composed of different areas (a forest, a training ground and a building for example), the tag "boundary=military" is only put to the external limits (generally fences), not between the "military" forest and the training ground.

The tag is used to mark the limit of the area which is military owned. Access is forbiden for the public. You usually find fences or walls, but on larger area, only signs are visible. 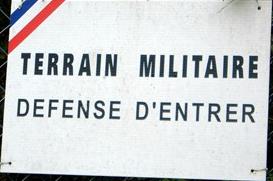 For a lot of land types inside a military base (forest, lakes, rivers...), it's impossible to use 2 tags : "landuse=military" and "landuse=forest" (for example). Military bases can also include sport facilities, parking lots, schools...

The same as "boundary=national_park", but in red. Appears on zoom 7 and above. If a "name=*" is set, appears for zoom 8 and above.

To the talk page please.