Proposed features/Multiple schools on one ground 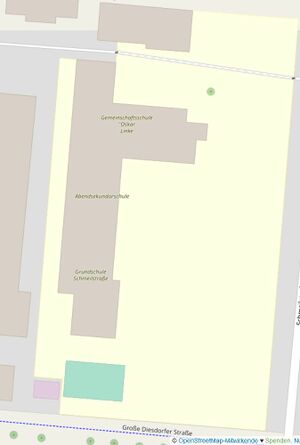 According to the wiki-page of amenity=school it's discribes the school at itself. It can be mapped as node or area of the ground of the school. So there is a problem there when several schools share a school site/ground and make so a "school complex", sometimes the schools use the same buildings. Such complexes existing in several countries, like Germany, UK, USA, Portugal and Netherlands.

As workaround there is the use of amenity=school on the full complex-ground. Often without a name. But it is not a valid use for what the amenity=school tag is created. This was a misuse of amenity=school, because there were no other useful possibility. But it is therefore necessary in such cases to differentiate between the school grounds and the schools themselves. (E.g. to count schools in an area). It is also not possible to identify a

amenity=school with the Overpass API, because amenities without name=* are not interpreted as areas. [1]

For this distinction it is suggested to mark the country used for educational institutions with "landuse = educational". However, if the school grounds of a single school are provided with the amenity = school tag, then this usage already implies the landuse = educational. (See Tagging section)

For every school there should be only one element with amenity=school.

The same can happen if, for example, a kindergarten and a school share the ground. There is also used landuse=school, but especially with regard to the last case and the more general situation, landuse=education is to be preferred and should be deprecated

The landuse=education can be used in different ways:

In certain cases the ground can also be tagged with name=* (e.g. in Germany several schools are in one school centre/school complex - German: "Schulzentrum").

For every school there should be only one element with amenity=school. (Also at schools in a site-Relation) 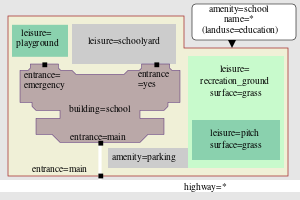 Example of usage at a single school

At suggestion the landuse could be rendered with the same background color, as usual educational amenity. After this proposal a feature request at the OSM-Carto GitHub.

This could be realized with a MapRoulette-Challenge. Please feel to discuss this on the discussion page section.

The result is Approved with 56 votes for, 12 votes against and 5 abstentions.

@Dieterdreist: The way I'm reading this proposal you can (perhaps even should) still tag schools and universities as areas, and nothing needs to change for the vast majority of cases where one educational facility has its own grounds. landuse=education then should be used where multiple educational facilities share grounds/campus/area. Is this something that may need clarification from @SafetyIng:? --JeroenHoek (talk) 12:00, 8 May 2021 (UTC)

@Carnildo: Isn't it the opposite? By providing mappers with the tagging to tag school grounds, data consumers won't have to handle the amenity-in-amenity case, which rather than being a supported tagging solution is really tagging for the renderer. Fixing broken tagging seems preferable to blocking a tag to promote ambiguous use of another. --JeroenHoek (talk) 11:52, 8 May 2021 (UTC)

Do you really need it when it can be known from the amenity=* inside? Multiple school types could be present. isced:level=* may be better for this. As a side note, ideally situation of multiple campuses for a school should be handled in the future, and this would have an education complex feature added (instead of an abstract landuse=*. ---- Kovposch (talk) 05:23, 9 May 2021 (UTC)

Well education=* should atleast be optional for those who want to use it and indeed, maybe it cannot be used always. Maybe you can even introduce the tag education=campus for grounds with a campus. At this example https://www.openstreetmap.org/way/729390932#map=16/51.9839/5.6640, I would use landuse=education + education=university|campus. This is clearly a university campus with amenity=school because it consists of many buildings with different purposes and not only education --Cartographer10 (talk) 08:49, 9 May 2021 (UTC)

Further specifying landuse=education via an additional education=* tag sounds natural given that this is done for landuse=residential as well with residential=*. This proposal doesn't block such an extension, and I think education=campus makes sense as a refinement of landuse=education. education=* looks to be in some minor use as a (deprecated?) alternative to amenity=*, but it shouldn't clash with what you are proposing. --JeroenHoek (talk) 09:37, 9 May 2021 (UTC)

Allow me to comment on your vote, since this was brought up in other comments. I believe that nothing forbids someone from tagging an entire building (area) with amenity=school instead of creating a point. Points will be "mandatory" in case of several schools in the same building. Anyway, this could be better explained in a future wiki and I don't see why it should cast a no vote. Also, it doesn't have to have a transition plan. Mappers will continue to map as they think it's better, and if they encounter cases where this scheme could apply, then they'll have the support of the community in the form of a well explained wiki. Regards.--AntMadeira (talk) 20:33, 11 May 2021 (UTC)

Maybe I misunderstood, but tagging as area still would be OK - just each school area would need to cover area of school (for example one wing of building) Mateusz Konieczny (talk) 09:01, 14 May 2021 (UTC)

Formally speaking this is not a concern that can be addressed by a tagging proposal, but on the whole landuse-tags render below most greenery, so I would expect any rendering in Carto in the future to not form a regression compared to the rendering of amenity=school. Ideally, Carto can simple use the same background as amenity=school (which SafetyIng suggests here), but that is a call for the Carto maintainers to make of course. The existing rendering of landuse=religious would make the chance to see rendering eventually hopeful though.

@Eiskalt-glasklar: I wouldn't worry too much about that. Already, amenity=school (or one of the the others) implies its land-use, just like many other amenities and leisure objects. This just makes it explicit, just like landuse=religious. You are right that multi-polygons are unwieldy with large landuse=* areas, but in practice mappers will either just put this one on top of a larger land-use, or split it up further like this. If you have multiple schools that share a single grounds, than changes are you are already on the edge of a landuse=residential anyway. --JeroenHoek (talk) 16:40, 15 May 2021 (UTC)

@Kenji: Did you read the proposal? That doesn't solve the problem of more than one school sharing the same grounds and the resulting tagging for the renderer. --JeroenHoek (talk) 16:05, 16 May 2021 (UTC)

multiple amenity=school, problem solved. schools that are administrative separated have distinct boundaries where each headmaster makes the rules. there is no shared ground, respectively that is all landuse=residential. and it should definitely not have a own landuse tag, compare leisure=sports_centre --Kenji (talk) 20:04, 16 May 2021 (UTC)

@Diegokrein: You accidentally forgot to sign your vote. I have added your signature based on this page's edit history. --JeroenHoek (talk) 16:48, 16 May 2021 (UTC)

--ZeLonewolf (talk) 18:08, 17 May 2021 (UTC)
@ZeLonewolf: I agree with you in terms of consistency when tagging single schools on one ground. But I also understand that some people may disagree with you. Either way, those people who think like you may oppose this proposal, and those who disagree may oppose an updated proposal. Worst case, the use of landuse=education for multiple schools on one ground will not be approved just because there is disagreement on how to tag single school on a single ground. This may happen even if most people see a need for landuse=education in general.
So I think we should focus on the main issue of this proposal, which is multiple schools on one ground. The treatment of single schools may (later) be decided in a separate proposal. --Bstein (talk) 10:46, 21 May 2021 (UTC)

@Ezekielf: A lot of amenity=* and leisure=* have implied land-uses (and this is fine). Making them all explicit would mean a lot of redundant tagging and a major change way beyond the scope of this proposal because that would affect a lot more tags than just the educational amenities. Making the educational amenities an exception in this regard isn't helpful either. I don't think existing school grounds with multiple schools in it now tagged as empty amenity=school entities will be retagged as landuse=education en masse until rendering support is there in Carto, but ultimately local mappers will have to make that call. Are you worried that school grounds will become temporarily invisible in Carto-based renderings? --JeroenHoek (talk) 06:17, 18 May 2021 (UTC)