in case of emergency assemble at the muster point.

Dont mix up with this meeting point

This meeting point is to meet arriving passengers...

Most people misunderstand the emergency assemble sign (the green one above). They think that it is a sign for a meeting point and use it this way. --EvanE

On the other side the sign itself is to detailed, to be recognized in smaller versions necessary in map displaying. So we might need a simpler version of it. This might be a green square with four arrows, one from each corner. It might have a dot in the middle to emphasize the point in assemble point. The arrows (and dot) might be white, black, yellow or red, the later two if you want to emphasize the emergency meaning of the sign. --EvanE

But both are not my main point.

Anyway let me give a few remarks:

I suppose, that most non-british people don't understand the term muster_point (as I did). Terms like assemble_point or emergency_assemble can be easier understood by more people. --EvanE

Yes, I agree, it's not an amenity, but any place selected by authorities for emergency assemble followed by evacuation. In earthquake and tsunami affected countries signage is already a practice for disaster prevention, so this proposal is good to support humanitarian tagging.--Federico Explorador 19:51, 30 May 2012 (BST) - so the name of the proposal should be updated.

I would name it emergency=assemble_point or emergency=meeting_point. I don't think it is an amenity, neither I had understand the word "muster point", if I hadn't looked it up. --HostedDinner 22:42, 27 September 2012 (BST) 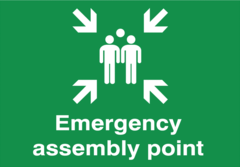