This is the second stage of the TMC proposal. Goal of the overall proposal is to find a simple, useful, understandable and easily maintainable mapping scheme for TMC location codes. These codes allow a connection between TMC traffic guidance messages and OSM objects, so that OSM based navigation systems can calculate their routes under consideration of traffic messages. Goal of this second stage is to connect neighbouring TMC points using route-like link relations.

In the first stage of this proposal a tagging for TMC points has been proposed. Most of these points are part of the road network and mark either locations such as bridges, tunnels or service areas along a road, or intersections of several roads. In this second stage of the TMC proposal links between these TMC points will be established. These are routes which contain those OSM ways that a driver uses to get from one TMC point to the next.

The TMC point locations mapped in the first stage of this proposal already allow to determine which TMC points a driver passes by on his route, and to figure out which traffic messages are relevant for this route. However, they still come with a few restrictions:

For this reason the connecting ways between neighbouring TMC points should be mapped with route-like TMC link relations. This mapping solves these problems:

The reason why TMC links are only the second stage of this proposal, despite their clear benefits, is the higher effort which is required to map TMC links compared to TMC points. This effort is reduced if the TMC points have previously been mapped in OSM. They provide orientation guides for the end nodes of TMC link routes, and thus also allow an automated error checking of the created TMC link relations.

Every link between two neighbouring TMC points, which are located on the same road and linked via their positive and negative offsets, should be mapped using exactly one relation tagged as type=tmc:link. The members and tags of this relation should be as follows. 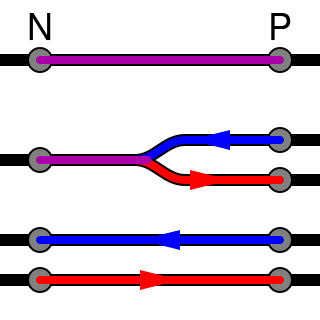 Relation members are those OSM ways which are between two neighbouring TMC point locations. They can be found following these rules:

The following tags should be present in any TMC link relation:

No other tags are affected by this proposal.