Purpose of this tag

At the present time, persons looking for a route that will enable them to bike safely from 'A' to 'B', could look to specialized maps (as opencyclemap), but what if there is no cycleway where the want to go? How to choose between street 'X' and street 'Y'? One can be much safer than the other. Therefore, it is worth to tag (then highlight in adequate rendering) those streets (or roads) that are safer than the surrounding ones. 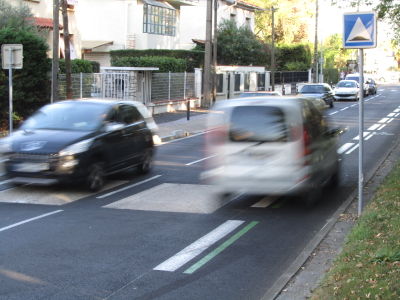 Imagine a street witch cycleway=lane, where speed limit is set to 30km/h, and with traffic calming. That sounds like a good choice to ride this street isn't it? But wait a minute, and look to the situation depicted on the right: although this is strictly forbidden, there are places (at least in France) where cars are frequently using the bicycle lane to avoid the speed cushion! This not only annihilates the traffic calming effect, but also increases significantly the risk for cyclists. This street is definitively not a good choice for cyclists worrying for their safety.

There is no other way for distinguishing between a "safe" street for cyclists and an unsafe one, than having a tag dedicated to this purpose. By allowing different levels of safety, one will be able to adapt street choice to the desired level of safety, from children to the tough cyclist.

How to use this tag

Since the situation varies a lot between countries, more detailed tag usage are to be defined country by country (this is similar to the choice between primary/secondary/tertiary which has country specific guidelines).