There existed a tag amenity=emergency phone for this, that has been deprecated and should be converted to phone=emergency.

More information can be found on wikipedia [1].

Emergency phones are also located in areas normally inaccessible to pedestrians, notably along motorways or within tunnels because it is dangerous for pedestrians to continue walking along the highway. They are generally regularly placed every about 2 kilometers along motorways and are used to signal accidents or problems in a vehicle. 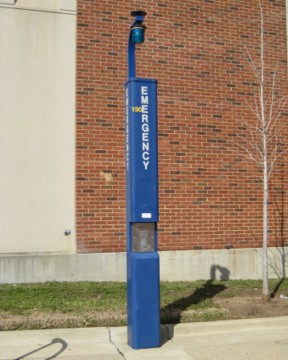 Emergency phone on a British street

The emergency box attribute would be categorized under the man_made key.

This should be rendered as a symbol that lies on top of the map. The symbol should be a blue box (color used in UK) with a white "E" for emergency in the middle (similar to the parking symbol). Other countries have other conventional colors (they are universally orange in France... as well as in UK, along motorways, tunnels, long bridges); there's no standard color for other places in city streets, railway/subway stations, private buildings and commercial centers/malls, and naural areas (beaches, ski resorts, forests) which could use local signaling.

Is it a box like a Telephone box/booth (like Superman changes in) or just a phone on a pole. Either way, I can see this being used for the emergency phones littered along freeways also (usually numbered, probably using the ref=* tag). I'd recommend changing the proposal to "emergency_phone", which seems more useful. Or maybe extend the use of amenity=telephone with someway to show it's for emergency use (maybe some thing like amenity=telephone, operator=emergency?).

This should also apply to wikipedia:Police box. I think amenity=emergency_phone would be good -- they're quite distinct from normal phone booths. I'd also like some optional tag like functional=no to mark such phones that aren't operated anymore. I've seen several of these that serve as orientation points despite their limited use. --Robx 13:57, 6 March 2008 (UTC)

I'm going to repeat what I wrote in the amenity=drinking_water proposal. To me it makes no sense to incorporate several different ways to tag if something is working/in use or not into several different proposals. Just use the disused tag for it. --Cartinus 01:28, 12 March 2008 (UTC)

I am gratefull to live in a corner of this planet where these are not needed, especially not on semi-public, academic areas like a campus. Is there any effective gain of security apart from the psychological effect?

This seems like a very good proposal because you can see slightly different ones all over the place. Alongside a motorway(good when your car breaks you have SatNav to tell you which direction is the nearest!), and Royal Parks in Greater London have them just inside gates that get locked. All of them should be able to be covered under this. -LastGrape 00:08, 13 March 2008 (UTC)

I think amenity=emergency_phone with disused=* if necessary is the best possibility to tag that. So it can be used for german "Notrufsäulen". --Uboot 23:14, 11 May 2008 (UTC)

Could someone start the vote please? Most of the discussion here is from March.

I'm all for this object. For my usage (mapping the emergency phones on my university's campus) it would also be useful to have a way of labeling the phone on the map with some sort of unique identifier. At my university, we identify the phones by the last four digits of the phone number assigned to the call box. --Dygituljunky 12:14, 12 September 2009 (UTC)

Emergency phones are of great importance for navigation systems for visually impaired persons. They are planned to be rendered on the blindmap.