This will proposal will resolve the ambiguous use of landuse=farm.

There have been several (emotional) discussions on talk-de about landuse=farm and its ambiguous meaning in the English language and even more so in German. In consequence the landuse=farm tag has been used by some mappers to tag farmland, others using it to tag the farmyard with all the farm buildings. 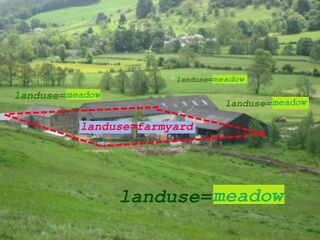 Proposal for the new tag landuse=farmland for an area

The word "farmland" is more generic, will be better recognised and memorised for non english speakers and is less ambiguous than other suggestions like landuse=field already made for this type of land.

JOSM and its validator plugin is reporting landuse=farm as 'unknown property value' and suggests "farmyard" and "farmland" in its presets for several months now.

Tagging could later be refined with tags saying something about the produce or usage of this land.