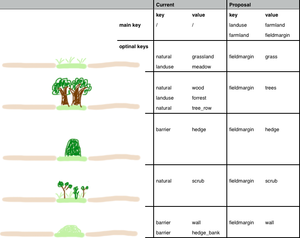 In most regions of agriculture a lot of fields and meadows are surrounded or separated by strips of various plants (trees, grass, shrubs,...). These areas are called field margins/borders (in german: Feldrain).

There are several purposes for field margins.

Currently these areas are mapped in several ways (some used tags are even inadequate for this purpose). Examples: landuse:meadow,forest,grass natural:wood,tree_row,grassland barrier:hedge and many more.

In my opinion there should be a way to tag these areas consistent but also give an option to tag it more detailed. Therefore I recommend the usage of farmland=fieldmargin combined with landuse=farmland because these areas are mainly managed by farmers. Furthermore by using a subcategory of farmland the landuse=* tag becomes/stays cleaner and more structured (cascading usage of landuse).

The consistent tagging of field margins has several benefits:

This idea was also discussed on the tagging mailing list and in the german part of the osm forum.

Fieldmargins are almost always narrow linear structures. I would prefer to have them tagged more by using ways rather than by areas, optionally with a width=*. Consequently I don't consider landuse as the appropriate category (always area). I'd suggest natural. This is used for areas (wood) as well as for ways (tree_line). I think it's a better approach than the usual barrier=hedge. The barrier property is in most cases merely existent, at least not the main purpose. --Seichter (talk) 20:46, 14 July 2014 (UTC)

See above I modified the detailed tagging part (at least). I had two motivations for this proposal. Motivation one was to get a chance to map filedmargins as areas (In my region fieldmargins are often a combination of straight lines and "islands"/areas of trees or scrub soccasionally, so its not a line all the way). Motivation two was already mentioned by you. In my point of view the usage of barrier=* for fieldmargins is not correct because fieldmargins aren't barriers. (I added option 2 (fieldmargin=* only now, because some people on the mailing list told me that the usage of barrier=* for filedmargins isn't wrong. Apparently there are other opinions.) Thanks for your feedback. --Descilla (talk) 12:24, 15 July 2014 (UTC)

I have no objections against mapping fieldmargin as areas, I simply don't want to be forced to.
landuse implies area - I'm not allowed to map simple lines in trivial cases (e.g. a field margin of several hundred meters one meter wide)--Seichter (talk) 21:24, 15 July 2014 (UTC)

I consider the use of natural or landcover for additional tagging as not appropriate. They are used for first level tagging typically mutually exclusive. Common practice is to repeat the value as subtag key:

I agree (that was also my opinion) See changed "Tag suggestion" part and answer to Seichter above. Thanks for your feedback --Descilla (talk) 12:24, 15 July 2014 (UTC)

A minor issue: Field margin is written in two words. That is usually expressed by underscore for tagging keys: field_margin.--Seichter (talk) 21:24, 15 July 2014 (UTC)