A hypermarket is a large store selling groceries, clothing, and other goods that fits the definition of both shop=supermarket and shop=department_store. Commonly known in North America as a superstore or supercenter.

This would alter the current practice of tagging these features as shop=supermarket.

At least in France, there are plenty of hypermarkets (Carrefour, E. Leclerc, Géant Casino, Auchan... essentially). These shops are much larger than supermarkets (at least 2500 m², but often more than 8000m², and up to 25000 m² in France), and are most often located in shopping centres, with many other shops.

A specific key "shop=hypermarket" could help users to know that they would find a larger selection of products to buy, compared to a supermarket. 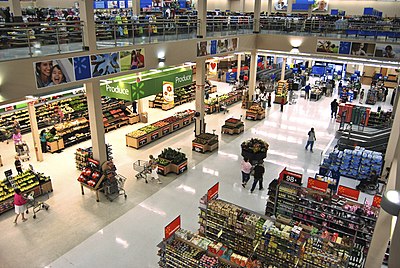 A Walmart Supercenter with grocery, clothing, and other departments 58177745

Hypermarkets are commonly found near large population centers and exist in many different countries.

Certain pages acknowledge the existence of hypermarkets as distinct entities. Their tagging recommendations would be changed to shop=hypermarket.

shop=supermarket:"A department store that sells a full selection of groceries (e.g. Walmart Supercentre) which is often called a "hypermarket" should be tagged shop=supermarket"