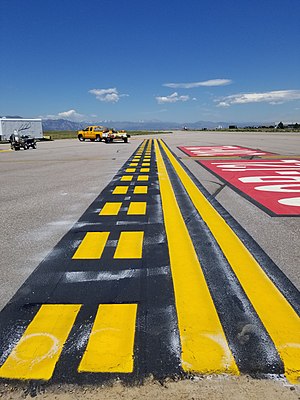 The runway holding position marking is critical to airmen navigating the airport surface. In simulation environments, proper rendering of these markings can greatly enhance realism and improve training. Further, failure to hold at the marking as instructed or adequately clear the holding position marking can and has resulted in catastrophic accidents. NASA and others have found that turn-by-turn directions could significantly reduce the number of runway incursions (improper entry into the runway safety area which may create a risk of collision on the ground). Testing these turn-by-turn systems, however, requires detailed airport information, and must include runway holding position markings. In a simulation environment, OSM would provide an excellent data source.

This tag would fall under the aeroway category, which is also used to mark runways, taxiways, and other features that are used for navigating the airport surface. We suggest using the tag aeroway=rwy_holding_position.

Ways. Capturing the shape of the holding position marking is important as it neither always a straight line, nor always orthogonal to the taxiway. Examples of can be found at almost any airport (e.g., the departure end of 13R at Dallas Love Field).

Can be rendered as shown here