Stocks were used until 1872 in the United Kingdom for public humiliation and punishment of offenders. An offender would be shackled by their hands, feet, head (or a combination thereof), and subjected to ridicule, beatings or worse.

Examples of stocks have survived to the present day, and can be found in many towns and villages around the UK.

For more information, see the Wikipedia article on stocks. 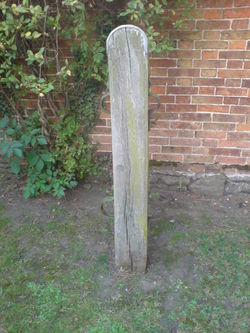 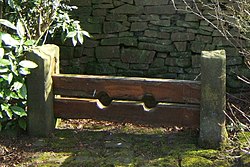 First image taken and uploaded by User:Flint. Second image taken from Wikipedia with thanks to the original uploader.

Due to changes in Query-to-map this Template does not work anymore. You can use Template:Osm-query2. Please replace or delete this use of Osm-query template.

I'd expect this to be for historic stocks and modern reproductions which are not already tagged as part of another feature. For your example "Tales of Robin Hood" in Nottingham (which, incidentally, is roughly 100 yards from where I'm sat) I'd expect this to be tagged separately as "tourism=attraction" or similar. Flint 12:23, 22 September 2008 (UTC)