The Pufferfish Display is a method of projecting images onto a spherical display. The company Pufferfish Ltd that makes them is based in Edinburgh. There location is here. There are pictures and videos on their website. The hardware was initially used at State_Of_The_Map_Scotland_2012

This page is to collect experience about the hardware and to provide basic images for Openstreetmap.org under a CCA licence to help others that are using this hardware for the first time.

Hardware box has been made and is presently at pufferfish for stress testing. From there it will go to Steven for further software installation. Presently we are looking for stills which we will put on the box. These should be deposited here. 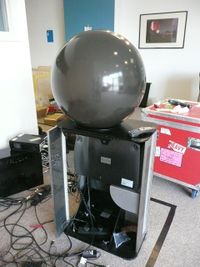 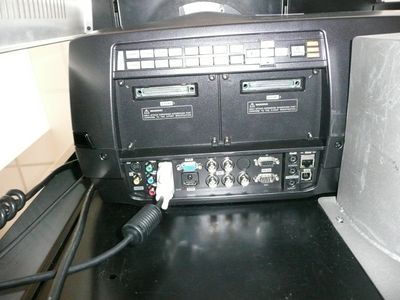 The Pufferfish display consists of a Commercial grade projector which projects a image through a fish-eye lens into a shere. The lens is at the very base of the sphere and cannot be seen in this picture. Also at the base of the sphere is a infra red projector and sensor which is used to interact with the sphere through a second fish-eye lens. The interaction is then received as a X-Y coordinate through a control box seen at the back. More information on the control box later. The the projector works the same as ordinary projectors but the image is sent through the fish-eye lens. The Pufferfish-projector interface is shown here

There are two ways of using the pufferfish. Either you take pre warped images and send it through the projector or you can use a hardware image warper to warp a standard image before sending it to the projector. A pre-warped image consists of a 1050x1050 pixel square image with a 75 pixal black band on either side. With the north pole at in the centre. A non-warped image which will be put through the image warper box is a 2:1 image. 2100x1050 pixel with the north pole at the top. This could be done easily through a full screen web page. 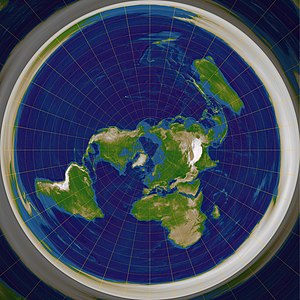 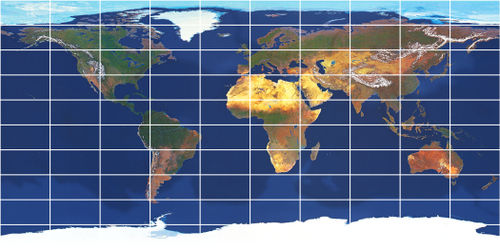 If you work on the equirectangular projection and use our Live PufferWarp box then there's no translation between coordinate systems needed. Otherwise if you mix the projections then it's handy to have a couple of functions to translate between the equirectangular and azimuthal projections. If you normalise the cartesian x and y coordinates (0...1) then to get the same point in normalised azimuthal polar coordinates you take the x to be the distance and the y to be an angle

Driving Projector from a Processing Sketch

I've come up with a way of taking the output from a normally-drawn Processing sketch and warping it into a polar projection before display. You draw to a sketch (as usual) and the warping is done for you in software in near-real time (7-15 fps).

The results aren't as good as with Pufferfish's own rendering pipeline, though, so for best results with video and stills I'd suggest we use that. (The sketch uses pure software rendering, so is prone to pixelation and 'artifacts') 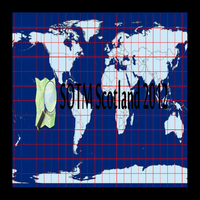 The pufferfish display is presently in storage for the duration of the festival. We will be able to get to play with it in early september. This page is the location of basic JPG,SVG or GIF images for testing once it comes back. 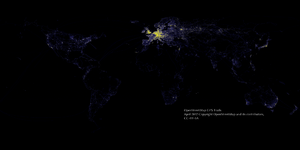 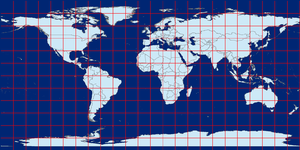 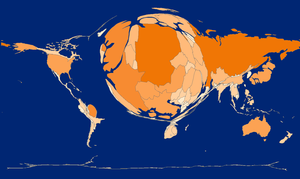 Cartogram of GPS uploads by country. Countries are scaled according to the number of GPS points falling within their boundaries [1]. First draft, based on a fairly small sample. --Stevefaeembra 19:39, 19 August 2012 (BST) 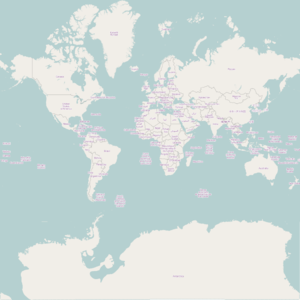 This is the stitched version of the png tiles from the OSM webserver zoom layer2. The resolution is getting close to the high resolution of the pufferfish display. This is to assess what it looks like without any modification, then to create a hacked still image for general use and to play with

Rough Guide to what we would like to accomplish

We will need to create a understated visualisation with the sponsors logos e.g. ITO and Openstreetmap

The different visualisations can be put into different groups.

External References of possible images for projection on Pufferfish

After the initial play with the pufferfish we have realised that the easiest and best way to experiment with the pufferfish is to have dedicated hardware. It is recommended that we need a decent video card with Dual DVI ports. We don't need a lot of space but speed and reductions in heat production suggest a solid state drive. We want a dedicated machine because we want to mirror the display rather than have dual displays. This makes is easier to use full screen. There are two resolutions we will need 2100 x 1050 and 1050 X 1050 square.