The South and North-Kivu Provinces share a long border with Burundi, Rwanda and Uganda and have been the refuge of various rebel groups for more than ten years. There is presently more than 800,000 displaced people and 100,000 persons in camps. The recent fightings provoked important displacements of people. In early December 2012, the ICRC highlighted the worrying and complex humanitarian situation in this region. There is currently a relative lull in the areas that were hardest hit by the recent fighting, while at the same time other parts of Kivu communities suffer the effects of fighting and acts of extreme violence, which spare neither women nor children.

While insecurity and violence continues, the humanitarian organizations try to join refugees where they are and support them. Taking into account the number of displaced people, their needs for food, water and medical treatments and secure environment, plus the difficulty to locate and join them, this is a major operation. Detailed maps of these areas are needed by the humanitarian organizations.

The HOT Team presently coordinates efforts with humanitarian agencies and a GIS specialist on the ground in Kinshasa.

For the Pre-Activation, the priority is to map areas around Lac Kivu along the RN2 road from Goma north of the lake to Bukavu, south of the lake for a distance of more then 130 km. Micro-tasks are defined where Bing High-Res Imagery is available. Hot Task Manager is used by the HOT coordinator to define these micro-tasks. Areas around Goma, Bweremana and Minova, were displaced people are reported, have been traced in priority.

Given the very volatile situation in the Kivus and the large zone to cover, HOT changes the status of this intervention from Pre-Activation to Activation. We are still looking for aerial imagery for areas not covered to adequately respond to this humanitarian emergency. 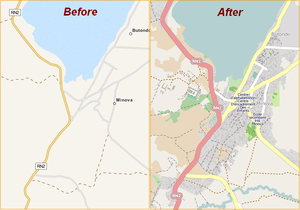 Job 108 Minova, beginning of december 2012 : Bweremana and Minova were mapped in four days.

The HOT Tasking Server is used to coordinate simultaneous work of various contributors. The mappers may select a micro-task and contribute mapping. Various tasks have been defined to map various areas around Lac Kivu.

Editors such as Potlatch2 or JOSM are used to edit the map for the selected micro-task.

The first priority is to map along Lac Kivu. Task Manager jobs have been setup for areas where Bing Imagery is available.

In parallel, discussion are ungoing in early december with UN agencies and humanitarian NGO's to obtain imagery from satellite agencies through international humanitarian channels.

For help using OpenStreetMap, or other requests/information: