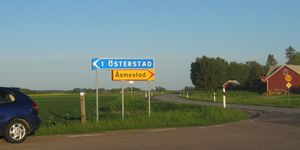 An example from Sweden. Instead of just saying "Turn left in 200m" a routing software also could say "Follow the sign to Österstad".

This proposal is to allow information about destination signs at crossroads to be entered into OSM.

Note: The originally intended purpose is rendering on navigators (like this - in the next intersection follow the sign "E4 Malmö") or in turn-by-turn descriptions when following an already made route - in the original intent this is not for aiding the creation of routes.

Colours should default to some (preferably national standard) presets if omitted. This is handled by the routing/map showing software. Since shades of yellow are probably not interesting I don't see a need to specify an RGB-colour. Colours could (should?) be choosed from a set list e.g. black, white, red, blue, green, brown, and yellow.

Lets say I'm approacing the crossing in the photo on the top of this page and the routing software says that I should turn left. It would be an additional aid to know that I want to follow the sign to Österstad. This aid becomes increasingly helpful when following a larger road with many exits or crossing ways. 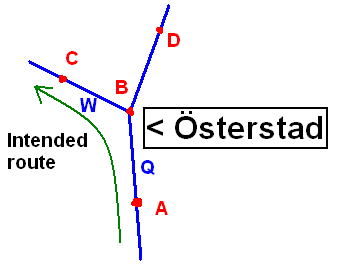 The relations for the signs in the picture: (Assuming that the signs are not visible from the Åsmestad road.)

Questions to be ironed out

Discussion on the Talk page

I have to agree with you in your reasoning. Shame it didn't come up during RFC. A little too big change to make during ongoing voting. I'll make a note of it on the discussion though. --Cohan 16:57, 18 July 2009 (UTC)

of a routing aid the destination should point to a physical location (role:destination). The information held in the relations should not be restricted to "rendering only". Moreover I don't the like the color tags. This is not useful for good rendering. --Mkowa 22:06, 21 July 2009 (UTC)

Are you talking about using the relation for finding routes or following an already made route? --Cohan 08:32, 22 July 2009 (UTC)

Are you talking about using the relation for finding routes or following an already made route? --Cohan 08:32, 22 July 2009 (UTC)

I count 15 votes and 1 opinion that doesn't clearly vote in any direction. Of the 15 votes 8 are approvals and 3 opposes only because the name was destinationSign and not destination_sign. Since that is now corrected I count them as approvals as well which gives a total 11 approvals out of 15 votes.

The counting is incorrect. Tordanik commented on 19 July 2009‎ "removing vote" in the summary, thus that is not a conversion into a 'yes' vote. None of the others who followed the reasoning changed their votes. Effectively there were 8 in favour, 5 against, 3 dislikes, 1 withdrawn and 1 opinion. Thus 13 votes, failing the quorum according to the pre-2015 rules in proposal process.--Polarbear w (talk) 18:22, 28 October 2019 (UTC)