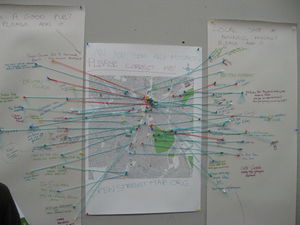 The Spacemakers Brixton mini mapping party was a past event on Saturday 24th April 2010 in Brixton market (South London).

We've been invited by Pete Gravell to run a mini mapping party at Brixton Market as part of a tech themed event, which in turn is part of the wider project called Spacemakers brixton

We'll be setting up and OpenStreetMap stall, with some laptops for demonstrating editing etc, pretty printouts and printouts for doing Walking Papers mapping. So not an ordinary mapping party, but if we can get more experienced OSMers going along to help demonstrate and perhaps take people out on mini mapping excursions, that will be great. There's nothing to stop people doing the ordinary mapping thing too of course. Plenty of POIs to be mapped around Brixton.

Pete Gravell said "I think it would be great to get a bit of openstreetmapping going on - wouldn't have to be all day. It sounds like we'd be able to do something interactive (which is great) and also raise the profile of the openstreetmap amongst the general public. If you think you can get a few people together to run a stall for a few hours that would be great"

So let's do it! We have two people already signed up. User:Ciaran.mooney, and User:Welshie have stepped up to get things going. Who else?

In general things which will decorate a stall nicely will be good to bring along. Large map printouts / posters?

projector - If anyone has a projector or can borrow one for Saturday, there's a plan to project a map onto a wall for some sort of art project.