State Of The Map 2008/Getting there 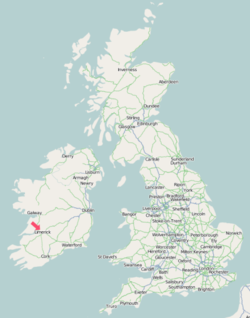 The State Of The Map 2008 conference venue will be Limerick map which is in the mid-west of Ireland.

How to get to Limerick

From the US / Canada

From the UK, can be done for £70-£80 (return), depending on where you live, and doesn't need to be booked in advance. See Seat61.com for details of the two possible routes (via Dublin or Rosslare)

Cork-Limerick is 100km, 60mi by road, approx 1.5 hours by train with one or two changes from Kent Station.

How to get to the Kilmurry Lodge Hotel

From Shannon airport: Bus Eireann buses serve Shannon airport and buses to Limerick apparently (!?) drive past the hotel. Taxis are available from the taxi desk in the arrivals hall, a fare to the hotel costing approximately €35-40. Sharing taxis is entirely possible since we are all arriving/leaving at similar times. See State Of The Map 2008/transport

From Central Limerick: From William Street in the city centre, take bus 302 or 308 to Castletroy [1], both of which stop outside the hotel. Name of stop unknown, presumably it's best to ask the driver...

The State of the Map conference 2008