State Of The Map 2012/Call for venues/Lille, France

Lille is located in the so-called blue banana, the urbanisation belt of Western Europa, at short distances and time from a cloud of major cities in Great-Britain, Belgium, Netherlands, Germany and Luxemburg and close to the glamourous city of Paris.

Located in Northern France, close to Belgium and Great Britain, Lille is the head city of a french-belgian conurbation which includes several other 100,000+ cities as Kortrijk, Tourcoing and Roubaix.

Lille is the siege of the French Région of Nord-Pas de Calais and of the tri-state public body Euroreg.


Many parts of the town center were recently renewed and urban artworks were placed in the streets for the "Lille, European capital of Culture" events in 2004.

Among many historical events that took place in Lille, one of them, which is to be mentioned as of global importance, is the discovery of the first anti-tuberculosis vaccine, known as BCG ("Bacille de Calmette et Guérin") in 1921.

Climate: temperate oceanic, between 20°C and 30°C in summertime.

For a full description of Lille, please read the Wikipedia notice here.

Two of the proposed congress halls for the conference are located in the town center and at very short distance from the International and Central Railway Station, Lille-Flandres/Lille-Europe. The last one, Euratechnologies, is easily accessible through subway.

About OpenStreetMap in France and around Lille specifically

We answer to the call of venue because of a particular dynamism of the OpenStreetMap community in France and in Lille.

In the second half of 2011 was created OpenStreetMap France which became necessary to coordinate actions and donations (for instance, the Fondation de France had given an important donation to support HOT). Helped by the beginning of OpenData in France (data.gouv.fr launched in december 2011), volunteers are improving and promoting OpenStreetMap.

The Région of Nord-Pas de Calais is part of the early helpers of OpenStreetMap, giving their data under ODBL (september 2011) and willing to help OpenStreetMap community (asking for our needs, trying to solve juridical issues…). Other places such as the cities of Brest, Paris, Rennes, Nantes and Bordeaux, and the Régions Aquitaine, Auvergne, and Bretagne, Firemen Administrations and many other bodies are also contributing, causing great excitation in the French community! 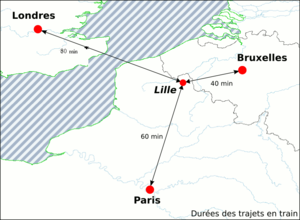 Located in the heart of Western Europe, Lille is easy to access anywhere you come from and by any transport mode you choose. It also has many hotels and places to go to and has a modern public transport system (automatic rapid transit underground, buses and tramways).<
Despite the extensive urbanization in some places, the country land is pleasant and turns to be hilly in the West and maritime resorts can be easily reached in France and in Belgium.


A top destination is the very famous capital of France, Paris (one hour only by the high speed train, TGV).

Getting to Lille by train is easy, as it is located in the center of the tripodic Railteam Alliance railway network from London and Great Britain, from Brussels and Northern Europe and from Paris and Western and Southern Europe.

I'm not in Europe

You can fly to London airports or Paris Roissy airport (CDG) and then take a 1 hour train to get to Lille.

As it has its own international airport, Lille is also very close from many hubs renowned for the huge number of low-cost airlines companies operating there.


London Heathrow airport is the most important in the whole world (63 millions passengers in 2010-2011) and the second is Paris Roissy (CDG airport) connected to Lille by a direct high speed train line (50 minutes).
To go to St. Pancras Eurostar railway station from Heathrow Airport, there is a Heathrow Express shuttle to Paddington Station, fast, but expensive, and a direct metro connection (Picadilly Line, approx, 3,80 £, 6 USD).


Moreover, you could find a lot of suitable low-cost flights landing in Amsterdam, Brussels and Luxemburg. Each one of these airports has an easy train connection to Lille.

Lille has many hotels. You should have a look at these:

Local organisation will try to obtain students dormitories (empty each summer) to rent for less than 25€.

A local little OSM-based company called Cléo Carto will allocate time to organize SotM. Another local company like Azaé can allocate some time to help. People working for the city of Lille and Nord-Pas de Calais will help organization: get the better conference center, ask for donations, etc.

The best conference center, the "Nouveau Siècle" won't be available before september. If we can wait till september, it would be nice: the Nouveau Siècle is in the ultra-center of the town. If we can't wait, the "Grand Palais" or "Euratechnologies" will do the trick.

Will be avaible only in september. It's the best place with many auditoriums, ease of access from the historical city center (close to historical building, shops and food). Nouveau Siècle is the property of Région Nord-Pas de Calais, so we can hope getting a good price. 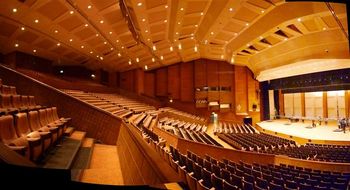 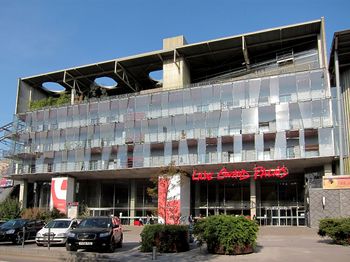 Is available in July. It has enough auditoriums to fit our needs. It's not so far from town center: 10 minutes by foot, less than 5 minutes with bicycle (Lille has a modern bicycle rental system). It's said to have a poor internet connection: we must check this point.

have a look at pictures on an image search page

It's quite far from town center: more than 45 minutes by foot, 20 minutes with a bike, 15 minutes with subway. There are little facilities around (food or shops), but the place is dedicated to computer technologies and it has enough auditoriums to fit our needs.

Have a look at pictures on a image search

As already told, Cléo Carto will work in order to organize State of the Map. Assuming that the company dedicates a 20% part time job for 6 months, with a 2500€ wage, it's a 3000€ contribution. Région Nord-Pas de Calais, city of Lille and conurbation LMCU will also provide non-financial help: getting access to congress centers at best prices, implicating locals compagnies, volunteers and politicians, etc.

The local implied OSM community has ~30 people and a local coordination mailing-list. In the last month of 2011, several events told about OpenStreetMap in Lille:

This community will help making State of the Map a success.

As in France we can ask:

We can also ask any worldwide corporations.