State Of The Map 2016/Informal Sessions

When we get together for State of the Map, there is so much to talk about and work on in person.

Friday, we have two sessions already filled by Lightning talks from the early call for proposals.

Saturday, we may have extra slots for, slightly more informal, very short Lightning talks either with some slides, or microphone only. Please add your name and subject if you want to speak there!

On Friday, Saturday and Sunday of State of the Map, we will have several spaces for informal Birds of a Feather (BoFs). These are informal meetings, planned ahead or thought up spontaneously. Discussions, mapping, code and documentation sprints, and hacking sessions, whatever you want! The sessions will take place in the Foyer and "Building D" classrooms, adjacent to the main conference hall. We will have a sign up board prominently in the main area to schedule sessions and add ideas.

And all day Sunday, we have Free and Open Space in Nelson Mandela Hall! Collaborate together on coding, mapping, or documentation sprints. Plan the next big thing. Unlike a Birds of a Feather session this is a non-bookable room; let's make it a hive of activity open to all.

Tell the world what you intend to work on, and start discussing informal sessions on this page. 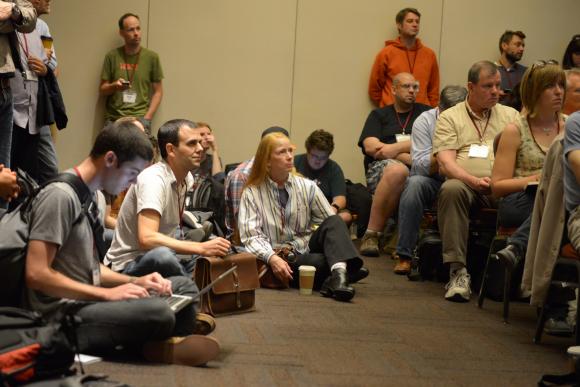 Add proposals for lightning talks below

The Elephant In The Room / Ilya Zverev

A short story of a geocoding bug with a history dating back a few centuries!

A vision about mapping the history of humanity. One unified map with a time dimension.

Birds of a Feather Sessions

Add your informal session ideas below

Local mapping projects based on OSM

Join Wikipedia map developers to discuss the new Kartotherian tile service, and how we are bridging the gap between OSM and Wikipedia communities. More info is at github.com/kartotherian/kartotherian or email me at yurik@wikimedia.org

Mapillary Community Manager Edoardo and Ambassador Shravan will be conducting a tour of the university and surrounds with a local guide. Together we will use smartphones and 360º cameras to create photo representation of the university. To take part, download the app and join us in the Nelson Mandela room of Building Q at 11:45 AM on Sunday September 25th. We'll begin by introducing tools that allow you to use street-level photos to edit in OpenStreetMap. Sign up for the meetup here.

Trage Wegen are looking in to running an outdoor activity on Sunday: a "walkshop". This is a placeholder with more information to be added.

Where data is dense, there is no such thing as an import: data has to be merged. There are several tools available. Let's meet at the hackday to compare and document. Maybe we can contribute to building a toolchain for faster data conflation and error reporting towards the source. Feel free to extend this proposal with your own interests (or contact joost.schouppe (at) gmail.com )

Discussion about projects around this new technology from Mapbox and setting up a truly free base map style based on OSM data.

Possible time slots are Saturday (not yet in SoTM time table) or Sunday.

Discussions about the important utility of a global database of code snippets that will allow NGO`s, scientists and other related actors to be able to query and get informations from OSM quickly.

State of the Map - Working group

I would like to discuss you experience of cycling mobile map apps.

Are you happy with what is on the markets? What are your expectations?

GR long distance hiking routes belong in OSM. In France, that's illegal. Meanwhile, the Flemish GR organisation has decided to release their data for use in OpenStreetMap. In fact, they are hoping to migrate their entire data management to OSM. But there are still some big hurdles. First a general cleanup. Then constant quality assurance. Then integrating OSM in their website - maybe using Mapbox, maybe with an OSMbe tileserver they might donate. And they want a cool user interface. Maybe some GR routing tools too?

This session is for you if you want to learn from the Belgian experience or want to help build the tools we need for this project.

More info on the Belgian wiki

Routing optimization based on OSM

Innovating the use of OpenStreetMap

In this session we discuss ideas to innovate the use of OSM. Despite the fact that OSM data is produced in a collaborative manner, in many aspects different from methods applied in conventional mapping, the result is very similar: a static map with conventional map features and attributes. It is time to mimic the collaboration process by showing to users the different areas of accuracy, to introduce innovative visualisations, to provide users with Linked Open Data tools to facilitate links with other resources such as DBpedia and Wordnet, etc. The session will introduce results of the COST ENERGIC project, which has embarked upon advancing methods in Volunteered Geo-information. We will then discuss how such new developments could be reflected in the OSM process.

Also in this session we will briefly introduce a collaborative research project between ITC and the Netherlands Red Cross on how to identify remote communities based on openstreetmap. The pilot area is Southern Malawi, where the Netherlands Red Cross is investing in improving the OSM base map through the Missing Maps project and by using Mapswipe. From the participants we would like to get suggestions on how to calculate remoteness on OSM.

Putting OpenStreetMap in the Classroom

Using OpenStreetMap to teach mapping and geography is vital to the long term sustainability of the project. Educating people worldwide will create a diverse, multi-generational pipeline of OSM contributors. Similarly, the OpenStreetMap community has much to offer to educators and instructors of all levels and subjects. In this BoF, we will discuss how OSM can be brought into classrooms around the world. How can the OSM community support education? Do local chapters have a role to play? What is the best platform for getting OSM in front of students? Session initiated by members of the TeachOSM Steering Committee. Timing - Saturday afternoon or Sunday.

Navigation and Routing on OSM

Doing car, bike and walk routing on OSM is production ready. Companies like Telenav, maps.me, Navmii and Mapbox are proving that every day. Let's discuss where we see the state of OSM navigation right now and where it is headed. Contact @freenerd on Twitter to coordinate.

A hands on workshop on using Mapbox Studio to create custom map styles for OSM that can be used for various purposes:

The whole workshop should take around 2 hours and we can run through the whole process from extracting specific data from OSM using Overpass, creating custom tilesets, styling them in Studio and creating a simple GL app.

Let's meet and talk how to add more features to OSM Analytics, integration with other OSM tools for data quality analysis, and statistics. We have some ideas already listed here, let's hack some code or discuss how to move forward on some of them. Either Saturday morning or Sunday - drop me an email at giovand AT gmail.com or join the public gitter room to let us know if you're interested to join.

During this session we would like to discuss OpenStreetMap in Africa. David Luswata will lead the session.

In this session, we would like to discuss the Humanitarian OSM tags that have been used only very rarely. What are the reasons of this disuse and could it eventually be used on a more sistematic basis? Would it need to be re-shape to fit current needs?

Add plans for the Free and Open Space below

Get together to develop, set feature priorities, and on-board new developers to the OSM Tasking Manager https://github.com/hotosm/osm-tasking-manager2

Help migrate and expand HOT's Activation training documentation. We will be moving content from Moodle to GitBooks and/or expanding the content.