From OpenStreetMap Wiki
Jump to navigation Jump to search
Tag:natural=atoll - Other languages

The tag natural=atoll is used to map an atoll (sometimes called a coral atoll), a ring-shaped coral reef including a coral rim that encircles a lagoon partially or completely, and may include small islands or islets. 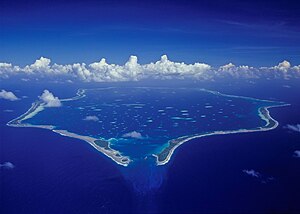 As a node: if the full extent of the atoll, including the reef, cannot be yet be mapped, then place a node at the approximate center of the atoll.

As an area: draw a closed way around the outer border of the reef, including all of the islands and the lagoon within the area. This is the most common way of mapping atolls.

Use a multipolygon relation if the atoll has more than one area; draw two or more closed ways and add each to the relation with role=outer.