What language code for Hanja?

I noticed in Seoul that some street signs have Hanja as well as Hangul and English. Here are some examples: 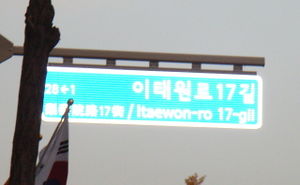 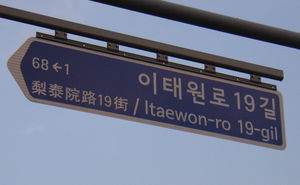 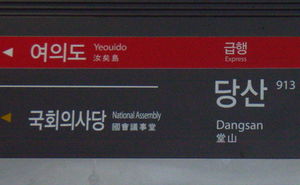 The ISO 639 codes for Hangul and English are ko and en, so we have tags for name:ko and name:en. We also use ko_rm for Romanized Korean, which is not an ISO 639 code.

There is no ISO 639 code for Hanja. Should we use zh, which is Chinese, or is that inappropriate?

Normally hanjas are one of characters for Korean like hangeul even Koreans prefer hangeuls than hanjas. It is impossible to write Korean phrase without hangeuls, but many Korean names can be written only using hanjas. There must be concerns for names originated from chinese characters. My example is Japanese because I'm not familiar with Chinese but it can be applied to Chinese or other ease Asian, too. Korean can read 東京 (in Japan) as 도쿄(Tokyo) or 동경(Donggyeong - Just read the hanja as Korean) but prefer 도쿄 when he/she knows it is used for describe city in Japan. However, for 東京都庁 (Tokyo Metropolitan Government), Korean doesn't read it Tokyo Tocho neither Donggyeongdocheong (Just read the hanja as Korean). Most prefer one is 도쿄 도청 (Tokyo docheong). (The reverse is similar. In recently, Korean goverment recommends using Katanata for proper names instead of transliteration to Kanji (Japanese-variation of Chinese character). Like this, transliteration is not suitable for convertion between east Asian countries. I think zh tag should be assigned when the name is properly traslated into Chinese. --Nrimbo (talk) 17:56, 14 February 2017 (UTC)

No, name:ko_rm is not standard, actually it should be name:ko-Latn IMHO this should be done as a mechanical edit and name:ko_rm should disappear. name:ko-Latn is the standard according to https://wiki.openstreetmap.org/wiki/Names#Localization --Panoramedia (talk) 04:01, 18 June 2016 (UTC)

It's time to change the policy of name=* back to the global rule; discard " (English)" and use Korean local name only. Problems of bi-lingual "한글 (English)" format are: