Seems like a neat overpass turbo config to make this map. I have a couple of questions

Are the purple dots supposed to be showing up for bus stop positions too? (public_transport=stop_position).

Thanks! The advantage of the overpass queries is that it highlights specific issues that can then be fixed by people with interest in those issues!
Regarding bus stops: I've tried to exclude bus stops. The query fetches all public_transport=stop_position, but the CSS then suppresses those:

you've written "Clearly each station should have at least one entrance", but for suburban above ground (not subway) train stations e.g. the overground network, we wouldn't use the railway=subway_entrance tag right? So we wouldn't be expecting these purple dots to have any accompanying entrance markers on this map? -- Harry Wood (talk) 23:26, 4 May 2017 (UTC)

Yes, that's true. However, we'd expect them to have an entrance=yes somewhere. The problem is that this is hard to tell, because stations often aren't in relations, so we don't know whether an entrance is associated with a stop. To work towards this, I created/amended about 81 relations yesterday, so that at least in central London most stations are now in a relation (often only together with a few subway_entrances, but in some cases also to do with some underground structures, e.g. see King's Cross, Bank, Oxford Circus and some others.) Some pictures: 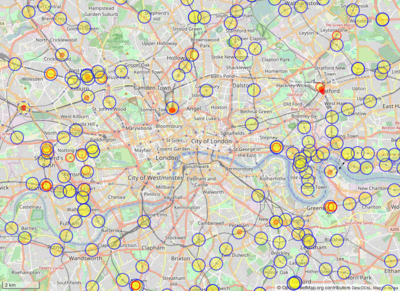 Stations to which I added/amended stop_area relations yesterday (which didn't have pre-existing stop_area or where there were issues, though in some cases there were stop_areas for busses nearby - I need to check in NAPTAN whether the stop_area for busses is the same as for train stations): 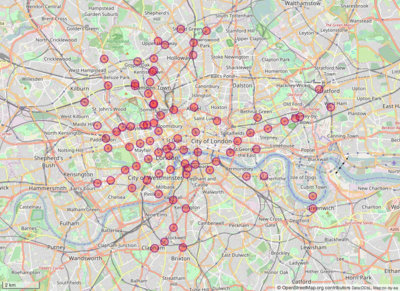 As you can see in the first image, there are some left, which I might do later... though as you get outside central London, as you pointed out, the subway_entrance no longer holds, so there aren't many more where creating relations is straight forward.

Finally, the NAPTAN data does have entrances, but I did look at this previously, and it wasn't very accurate at all. Nevertheless, one might be able to use the data to help people spot entrances.... If this map challenge takes off, I could look a bit more into this. Bjohas (talk) 15:12, 5 May 2017 (UTC)