Farmland could still be ambiguous. How about landuse=cultivated ?

Farmland could be left fallow or for pasture, and so isn't necessarily cultivated. Bob Jonkman 04:51, 30 September 2008 (UTC)

I would prefere landuse=agricultural. If you search wikipedia for farmland and for agricultural, I think you'll understand why. And other tags could be produce=livestock/crop/vineyard/orchard --Skratz 04:40, 11 November 2008 (UTC)

I liked the introduction of farmland in JOSM, but for the sake of a simple and extensible system I would welcome a change to landuse=agricultural produce=* (see also Proposed_features/Vineyard)--JND 20:35, 11 November 2008 (UTC)

I have my doubts about the meaningfulness of tagging farmland at all - this is the default in europe, almost everything that is not settlement or woods is some form of farmland. But the produce is too short lived for tagging to make any sense. It will usually be subject to change every year, most of the time the tag will be valid only for a few months as the produce will not be recognizable before substantial growth and after harvest when the area has been plowed over. Without constant updating, this will create many obsolete tags and misleading landmarks on the map. --Nop 07:11, 19 November 2008 (UTC)

Yes - it does not make sense to tag all farmland, only to the extend that the information is usefull. Vineyard or orchards are there for a very long time and are valid landmarks. In industrial zones some intersparsed fields (without the provision of a produce) are also worth tagging. So, as we say in Germany, do not spill the baby with the bath... --JND 16:10, 23 November 2008 (UTC)

Is this how it would be used? farm = farmyard + farmland, and farmland could be composed of pasture, cultivated and other types of landuse. Bob Jonkman 04:57, 30 September 2008 (UTC) 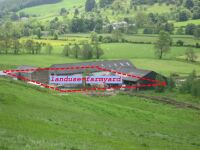 The accepted and documented tag for this feature is landuse=farm

The premise of this proposal is that there is some ambiguity, but I just don't understand what the problem is. There's lots of words we could use, but there's really nothing wrong with landuse=farm and landuse=farmyard

I hope that since I created this diagram, more people have been able to grasp this complicated concept, and so this proposal might perhaps (please) be abandoned?

Update: Since mid 2010, some people have gone to the trouble of changing JOSM presets in support of this proposal, told newbies that they should be swapping their tags over [1] and created a new version of my image in support of the proposal. And predictably enough Yarl's change was swapped back [2] "because is currently used more than 41000 times".

It frustrates me massively that people would do all of those things, and yet nobody has done us the courtesy of replying to this discussion to try to explain why this proposal is justified. I know that some people use an excuse that they don't like wiki Talk pages... but nobody?. Nobody has even replied to hint that maybe they disagree.

But anyway I think I may have finally come to discover what people are going on about when they say "ambiguous". It has been like getting blood out of a stone, but based on a comment from ulf and a comment from Tordanik here it is ladies and gentlemen. The justification for this proposal:

The landuse=farm tag when it was originally introduced, was used for both the areas of farming land and also the farmyard, and therefore there may still be instances of this in the database today. The landuse=farmyard tag was introduced a little later, so at this stage the landuse=farm tag became "ambiguous" because some mappers began strictly splitting things out, and avoiding landuse=farm on the farmyard area and using it only on the farming fields, whilst others mappers (and older mapped data) were still following the older approach of just using landuse=farm (and possibly only on the farmyard, the opposite of what we want) As such this proposal, which many mappers are following already, is to introduce the tag landuse=farmland. This tag is documented the same as landuse=farm, but because it is a new tag (well it was) it gives us a clean slate to migrate away from any instances of farms mapped the old "ambiguous" way.

Have I got that right?

Hello, I think part of the problem is that the wiki's navigation and design is tricky, plus not necessarily unified in terms of language; that, and there's the issue of splinter discussion groups, lists, the help pages, and the diary; so discussion is perhaps spread out over too many places - anyway yes, that's a side issue.

My understanding is slightly different in that i recall there being a farm tag for fields, and a farmyard tag for the farmyard. The trouble is, while landuse=farm could reasonably be understood to be farmland, a farm would reasonably imply the buildings itself, with the landuse being the agriculture, or fields.

While I've got nothing against tagging either way, the only issue will be where farm has been used to represent the farmyard in some areas, but fields in the other. I had assumed that consensus had been reached, by farmland now also being available in potlatch, hence my original query to migrate all of my instances of landuse=farm to landuse=farmland instead which would be a clean tag; given the hundreds of thousands of uses each of the two tag appears to currently have.

You're right in what you imply though, that having half ideas sitting at proposal stage, and then just coming into actual use via editor presets without clear guidance or consensus isn't necessarily helpful for users who just want to get on with the mapping side of things. This isn't really a dig at anyone - I give my time to improve the map as does everyone else, it's just some thoughts from me... (o:

What is a dig is that it might be better to check someone's edit history before calling them a newbie (o;

Haha. Apologies. You're not a newbie of course. I was imagining you that way, and floundering around looking for the information. No offence intended. Actually I was also imagining you might be German because I suspect that the DE versions of some wiki pages (and mailing lists etc) have always been a bit more pro landuse=farmland and against landuse=farm because of some weird international misunderstanding. For example there's a DE:Tag:landuse=farmland wiki page whereas the English version Tag:landuse=farmland is currently redirecting. The english tag docs are pretty clear, and currently leave this proposal off to one side looking rather unclear. -- Harry Wood 18:39, 6 June 2011 (BST)

No worries - I don't post an awful lot in the wiki or the help as I prefer to actually be out there in the world so it's probably an easy assumption to make!

Now, given I have all sorts of arguments at work daily around this sort of thing (i.e. how data is recorded and used - not in the mapping world, I hasten to add), we do seem to be in the situation where there are a large number of both tags in use 375'660 (for farm) and 215'387 (for farmland). From a data quality point of view this is bad, which is why we need consensus (which, once we've got we need JOSM and Potlatch to follow!). How do we progress from here to drive forward the case for consistency - as I said, I don't really care one way or the other what the actual tag should be... A case for using farm instead of farmland is that it would be easy to re-convert all the farmlands back into farm, provided the editor presets are changed... C2r 19:13, 6 June 2011 (BST)

At the latest on 11 July 2008 the documentation was made reasonably accurate that any new editors should not have been mislead. Another significant date for the analysis would be 24 October 2008, when the german map features wiki templates were written. Disregarding people still using it for both areas after that out of old habit, one could start by checking the numbers of things tagged with landuse=farm before that date (or even count of features that were changed from farm to farmyard). After that one could do some random checks (globally) where imagery is available, if there's any evidence that there reasonably could be any significant proportion of todays ways tagged "wrong". Alv 20:03, 6 June 2011 (BST)

Well that's because the developers of editors are free to ignore the wiki and decide upon tag presets by other means. I suspect the JOSM developers who are mostly German, were following the German wiki tag docs and mailing list discussions about the tags in German, and Potlatch only adopted the tag recently, probably based on usage stats (e.g. TagWatch). Both ignoring the fact that it's a disputed proposal on the english wiki. Everyone failing to explain why the tag is a good idea by replying here. Of course most proposals are disputed to some extent. Can't really blame the editor developers for wanting to stay out of it. In fact the order of events is interesting here. I could take a guess: Ye olde tale of the landuse=farmland tag -- Harry Wood 19:14, 8 June 2011 (BST)