Termite is a project to make an OpenStreetMap editor for indoor mapping. "Termite" is the name of editor software under design here (not implemented yet)

The editor is intended to be easy to use so that non-technically inclined people can easily make indoor maps. It will function both for indoors and outdoors but be targeted towards indoor mapping. An emphasis the editor will have will be for making structured, area-based maps with many overlapping ways.

A user will have a simple means of selecting a level within a structure on which to work, and then be able to work solely with data for that level. And features drawn will automatically be placed on the level. This will ease working with the underlying properties and relations needed to match the features to a level.

Indoor maps are not new and are very common, such as on the store directory at a shopping center. However, it is fairly new that people have started aggregating indoor maps in a consistent format as has long been done with outdoor maps. The existing indoor maps serve as a guide to how the standardized maps should look.

The following diagrams area a representative indoor map from a university building, the Yang and Yamazaki Building from Stanford University.

Each level is assigned an integer that we will refer to here as zlevel. By convention the zlevel of the ground floor is 0. Levels below ground have negative values and levels above ground have positive values. The zlevel is not to be confused with the name of the level, which is a string matching the name locally used for the floor. The name is often a number and it may not match the zlevel value. (In the United States, the name of the ground floor is typically "1".)

The zlevel can be viewed as a discrete vertical coordinate. Objects on a given level also have an elevation, or continuous z coordinate. This can be expressed relative to the level or some other absolute reference.

There are two other related but distinct discrete vertical coordinates used in mapping. The names used for these vary in different places. The three concepts are the following.

In outdoor maps, the road elements serve a double duty as a visual element and as a graph for navigation. In a typical indoor map it is convenient to have navigation graph but this is typically not used as a visual element in existing indoor maps. When the indoor map is created, a navigation graph can be created using the same way conventions that are typically used in the outdoor map. This will allow use of a single routing engine to route through the outdoors up into the room of a building, or to a product on a shelf. The renderer for the indoor map will typically not render these navigation ways, however.

In multilevel structures, the navigation way will traverse between floors, following the path of the level change mechanism (stairs, elevator, escalator...).

The following link has some additional indoor mapping recommendations: Indoor/Termite/Mapping_Recommendations

The official indoor mapping model of OpenStreetMap has yet to be determined. Some of the major proposals can be viewed from the page Indoor_Mapping.

The Termite editor is currently using a model loosely based on IndoorOSM, with a few changes. All naming definitions are contained in a configuration file for easy modification as the indoor conventions crystallize. The relation structure is necessarily coded into the software, but in a way that can hopefully be relatively easy to change.

The following is an overview of the model currently used in Termite:

The structure object, typically a building but possibly another object, is the object currently appearing in OSM. As an example, for a building this is the way corresponding to the building footprint.

No example source is provided because this object is identical to standard features in OpenStreetMap.

A structure can have one or more levels. Each level is represented as a relation object.

The relation type is level.

Ways do not appear in the level relation in this model. A way is drawn on a level if it's nodes appear on that level. This also enables a way to span multiple levels, if it contains nodes from different levels. This is one of the driving motivations to place the nodes rather than the features (nodes and ways) in the level relation. The most important example where this would be done is for a way used in navigation such as the underlying path for a stairway or an elevator. This enables the same navigation and routing infrastructure to be used on the indoors and the outdoors.

There is also a philosophical reason to place the label for the level on the nodes. The level is a discrete z coordinate and is a property of the nodes along with the x and y coordinates.

An alternate proposal is to in fact label the level as a property of the point. This was not done because then there would be no database reference connecting the nodes to the structure, and the database integrity cannot be enforced. The method or labeling the zlevel using a property of the node does however have the advantage that a node is enforced to be placed on only one level. The restriction must be enforced manually if the nodes are placed in a relation.

There can be many properties on a level. Two of them are of particular importance:

In the discussion pages on some proposals there seems to be some confusion as to how levels are labeled regarding logical ordering and display names. There is an attempt to make that explicit here. The term "zlevel" is used rather then the term "level" to try to minimize the potential to confuse the logical order with the display name.

An exemplary level relation as OSM-XML is provided below:

Features, including nodes and ways, are added to each level. A feature is placed on the level by composing it with nodes that are on the level. The feature types to be used is flexible and has yet to be standardized.

No example source is provided because this object is identical to standard features in OpenStreetMap, modulo new feature types.

This is the proposed layout for the editor. 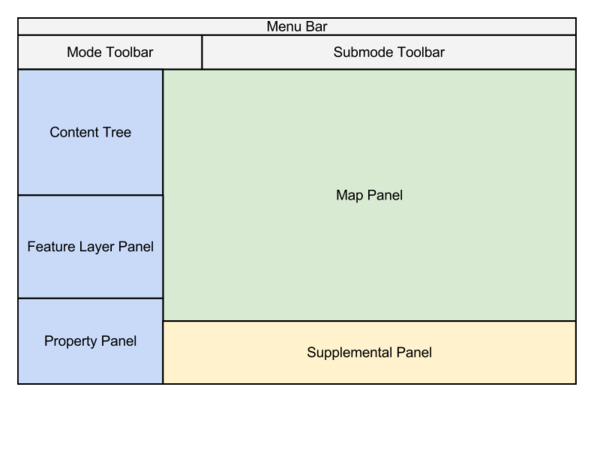 Work on the editor is in the early stages.

There are a number of outstanding questions related to indoor maps. Additionally, there is a potential problem related to adding large amounts of indoor data to the OSM database that might not be handled well by existing software, in particular the renders and also the editors. See the page Challenges_for_Indoor_Maps.

This tool and any other indoor editor should be used in a limited fashion until more decisions have been made on the format of indoor maps in OSM.