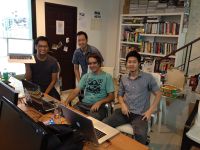 Hello, I am a Computer Scientist, specialized in Python, Free Software advocate and hacktivist, I love #OpenData too. Currently living in Spain, but tomorrow I could be anywhere else.

I discovered OSM around 2010 due to a routing project for handicaps in Spain and since then I felt in love with the project and spirit.

I mainly map using JOSM, I add the POIs that I collect when I travel(mainly in many countries in Asia), I joined some mapathons, contribut to HOT after some disasters occurs.

2012: Coorganized and worked in the Bangkok Mapathon to map the public transport: Bangkok Underground & Bangkok Skytrain