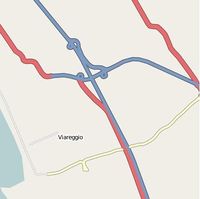 In the right side of this page you can see the Image appearing the first time I searched my City on OSM ... Really Desert! :-|

So, I taken my navigator on 12 February 2008 and I started the mapping.

Cities and towns I would like to map/I'm mapping

Everytime you go somewhere is the good time to do some healthy mapping... :-)

On 22-24 February I was on Diano Marina (Imperia-Liguria-Italy) for the wedding of a friend of mine. Why not mapping this town?