Started by mapping a good chunk of Ipswich, and luckily managed to kick the daily gps-an-area, josm-an-area habit. Now down to an every-now-and-then fix working on filling in the Shotley Peninsular and paths/tracks around Martlesham.

Took a liking to bezier curves that are now part of the tiles@home osmarender post-process to make the roads look nicer.

More recently liked the idea of shadows on roads which might appear in a future osmarender... 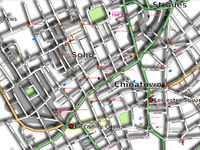 Presented some wrigging, squirming, breathing maps at the SoTM conference. This is a still from a breathing map. 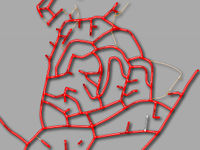