User:Joto and I have spent the last few months writing a (German language) book on OSM. Both of us had given a number of talks and found that there's really big interest even in non-Geek circles, and we felt that a good old-fashioned dead-tree book would be the right thing for many to start with OSM.

Initial hopes of getting it published before Christmas didn't materialize (together with a GPS logger the book would have made a cool gift...). However we're almost there now, just need to fix up the index and do a few other polishing touches, last corrections ("TIGER import to finish in February? Make that January!") and then it's off to the publisher's. 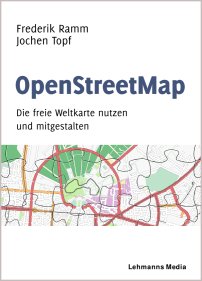 We're working with a small but friendly publisher (Lehmanns). They are likely to print 500 copies initially. We had talked to a few others including O'Reilly Germany, and all were interested but said they can't do anything unless they can be reasonably sure to sell 1,500 copies (which they weren't). We also evaluated Book-on-Demand printing but were a bit unhappy with the quality that was on offer. Also, the BoD market seems to be for everybody's first erotic novel mostly, and while some say that OSM is a sexy project it's perhaps still not the company we want to be seen in.

We will have 256 pages of text plus 32 colour pages with nice and shiny maps and screenshots (yes, like in those old books you have where the colour pages are all in the middle of the book). Content-wise, we have divided the book into four parts:

Part I is an introduction, sort of a "management overview", and a few words about the community. Part II, the "input" side, covers all you need to get mapping (what's a GPS, how does it work, how do I collect tracks, license issues, how do I use the editors, what are the map features, how do I map a roundabout with fan-outs, a dual carriageway with tram in between, whatever). Part III, the "output" side, covers ways to use the existing maps (i.e. put OpenLayers on your web pages etc.), and how to create your own maps with Osmarender and Mapnik. Part IV is the "hacking" part with details about the API, how you run it on your machine and how the calls work, about the details of the XML format, Osmosis, various import and export tools, the SQL schema and all that.

So it's pretty exhaustive and even if nothing is really constant in OSM, it should be sufficient to give anybody a kick start. Provided he reads German! - If the book is well received and if we can enlist the help of someone from the English community who is good at words, maybe we can do a translation together.

The publisher caught us by surprise by already adding the book to his catalogue, and now we have to quickly generate some content for the book's web site - we thought we can do that while the book is being printed!

The book also got a passing mention on German technology portal Golem, it seems they must have taken info from my text above - they surely are on top of development!

We have finally completed the PDF and sent it to the publisher. It is amazing how many errors you still find after having proof-read everything twice, and what's also amazing are the little things that OpenOffice throws your way when working with a largish Master Document and lots of cross-references...

The book is now listed at amazon.de, however without a cover image and without the option of pre-ordering it that you would have for books from the big publishers. We'll see how this turns out. It seems that Amazon stocks some of this publisher's books while others are just listed there and must be bought from marketplace shops which is of course less prestigious.

The publisher has received the print proof and says it looks all right. He mailed it to us and we'll have the final say. If we say "ok" then the book is going to be printed in the coming week.

We have checked the proofs (actually, a "proof" for the book cover and a "plot" for the contents, they called it), found them ok and given the go-ahead for printing.

On a related note, I (Frederik) have designed an OSM flyer with the help of people from the talk-de list; it is an 8-page full colour DIN A7 format flyer of which we'll initially print 5,000 copies and which contains a reference to the book. The flyer is done in SVG and sources will be available in our SVN.

The first printed copies are on their way to us. The book is now listed properly on amazon.de so people can actually pre-order through Amazon.

We received our first copies last week. The book looks quite good, we're very happy with it. We had had some discussions with the publisher about the paper to use, and we all agreed on using the slighly more expensive, slightly yellow-ish book printing stock (instead of pure white copying paper), and the decision was exactly right; that paper has a nice feel to it, and gives the book extra volume. The colour pages in the middle are printed on glossy photo paper.

Already a guy from Sweden asked us whether we'd let him do a Swedish translation!

Amazon.de still lists the book as "pre-order now", it will be a few more days until they have it in stock, but even pre-ordering will affect the sales rank. I have a script that downloads the sales rank each hour and makes an updated plot: http://www.remote.org/frederik/tmp/buchverkauf.cgi - a higher number in sales rank means less copies sold, and during period where no copies are sold, the rank slowly increases (as other books are sold and thus move to the front of the league table); whenever a copy is sold, there's a sharp drop in rank (because we are in a field of books only selling a few copies each week, one copy sold is enough to leave a few thousand other books behind!). So if you count the number of sharp drops you get an idea of how many books are sold through amazon.de... possibly 4 at the time of writing ;-)

The first print run has all but sold out. We discussed the options with our publisher (unchanged reprint, corrected reprint, improved version, new version - all of them are slightly different, for example what it says on the cover and whether it gets a new ISBN). The decision was made to make a corrected reprint in which we fix the blunders that the readers have found until now (not too many - the most embarassing was that I gave a wrong download URL for JOSM...), but which will not have enhanced content because it is too early to write about things like the 0.6 API or the new license, which might be covered in a 2.0 version in late 2008.

I'm also in touch with an English publishing house that does a fair amount of "niche" publishing (OSM a niche? pah!) and trying to land a translation deal with them, where they pay a translator to make the English version and we just check if everything is correct content-wise. We'll see if that works out - translation would probably cost a few thousand Euros and they need to do the numbers on that.

The second edition is here! It is larger by 64 pages, and makes a much better impression on your bookshelf because the paper is slighly thicker, giving us a total width of 23mm instead of 17mm. We have updated lots and lots of content, and added new chapters on various new important developments. We also cover API 0.6 (we had hoped it would be live by the time the book hits the sheves). Further details are on the http://www.openstreetmap.info/ page.

Only one month after publication of the second edition, the publisher told us that he has sold 650 copies already and is contemplating the second print run. We have no clue who buys all these books - is it new OSM mappers wanting to contribute, or users wanting to use OSM on their web pages and in their own projects? Is it people who already had the first edition and who have now "upgraded", or is it entirely new people? Is it, perhaps, mainly libraries? Whoever it is, thank you!