I first heard about the OSM project through FreeThePostcode, which I heard about on Pledgebank. I intended to use postcodes in a very limited way on my website, bandnet.org, to provide a listing of events happening within a particular area. I'm on a limited budget and am not able to afford the full PAF. Even a free database down the first character of the inbound part of the postcode is enough for my usage, and is what the npemap project is now going a long way towards providing.

I have a BGT-11 and BGT-31 GPS (NaviGPS with Bluetooth) that I bought for mapping.

I use Kubuntu Linux practically full-time.

One of the things I've been doing with the OSM data is generating an image from all the nodes in the UK (see below). Part of this image was used as a featured image on the wiki homepage from 11-18th November. These renders are done by importing the planet.osm file into MySQL and then using a PHP script I wrote to plot all the nodes based on lat/lon.

I've been working on rendering OSM data directly in the user's browser using Canvas (appears to be FF2/Safari only).

A very early demo can be seen at http://osm.bandnet.org/browse/canvas.html

Data is retrieved using AJAX so switching location is simply a matter of loading a new set of XML. Making it 'slippy' would be a nice feature but one that will require a good algorithm for caching data on redrawing.

The intention is to create an interface by which the user can easily choose what, and how, features are shown without having to prerender new tiles. Another is to create a basic interface for easily editing tags without needing any special software.

I can be contacted on the main OSM website, on IRC (#osm) occasionally, or through my talk page. 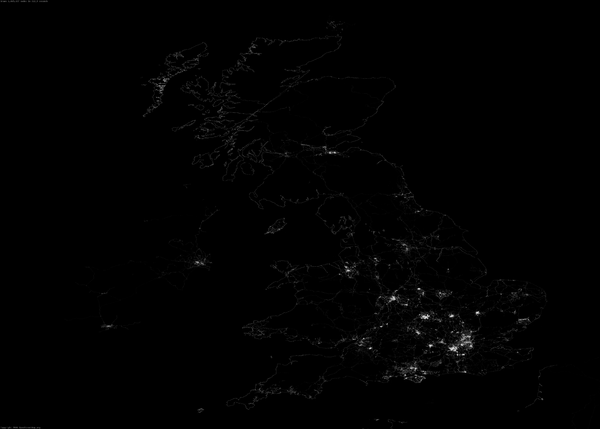