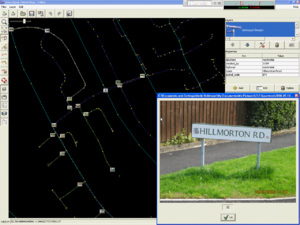 I am Immanuel Scholz, but please call me Imi :-). I live in Germany, currently in Dresden. Grab me at immanuel.scholz@gmx.de (if you are lucky - you probably got caught by my spam filter..)

I am a coder since about I was ten. I started on ZX Spectrum, switched to KC85-4 (DDR-variant of C64), then to C128, to Intel. On the way I chose Assembler, BASIC, Pascal, C, C++, Java and now Ruby as a programming language. I work as a professional senior software developer.

I saw Steve and Ben speaking at "What The Hack" in 2005 and knew what my next project would be to join :-). Maybe that was because I bought one of those nifty little Sharp Zaurus C3100 PDAs some weeks before together with my first GPS receiver. Since I have no geodetic background (except I chose geodesy as one of my minor field of study), I see my place as developer within the community.

I was in the position of secretary for the OpenStreetMap Foundation in 2006/2007. My special interests in the project are:

Imi is awarded a SuperStar for an outstanding contribution to the OSM project.