... is no longer a complete newbie in OSM mapping. My participation started around September 2009.

Sweden: I have special interests in Svenljunga in Sweden where I have a small cottage,where I intend to make a nice and detalied map - eventually.

Scotland: I also do remote tracing of south western Scotland where I have travelled a bit. The traces are based on old out of copyright Ordnance Survey maps (OS7) and the newer OS Street View. Lately I have also done a lot of work on Orkney: Coastlines, roads, places, buildings.

Greenland: I have recently initiated the Wiki project Greenland and hope to contribute here as well.

Haiti: Did a lot of traces from DigitalGlobe and other sources right after the earthquake.

Pakistan: Did a lot of traces from Yahoo after the flood, primary around Mardan and Sukkur

I use a Germin Oregon 300 for GPS tracing. I have installed OSM maps on it of course! I am very happy with this device.

I started using Potlatch, but when tracing from GPX I prefer JOSM.

Se my traces at http://www.openstreetmap.org/user/mortenjc/traces

I managed to install my own OSM server on Ubuntu and have played around with custom styles in Mapnik and also got a tile server running. This may come in handy some time.

I have used mgmaps on my Nokia E72 phone, created a map of greater Copenhagen using OSM Composer. Had problems with the coastlines though :-)

I do not have much experience with different data sources, formats and projections. 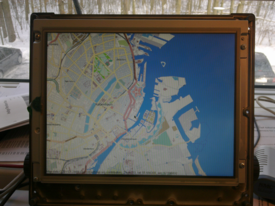 Here is a prototype of an embedded OSM map. The hardware is for Thrane & Thranes new GMDSS terminal, but it also has potential for other uses ;.-)