My Name is Ralf Zimmermann. Since Juli 2010, I am living in the northern part of Regensburg, Germany.

I have converted some OSM maps for the use with Pathaway on PDAs.

OSM Mapping I have done

Apr-2007: During a business trip to the UK, I did some mapping in Banbury and to the North-West of it.

May-2007: During a business trip to the UK, I did some mapping in the area of Heathrow.

July-2007: During a business trip to the UK, I did some more mapping in the area of Heathrow.

Sep-2009: Some mapping during my sailing trip in Greece (Dodekanes)
Nov-2009: Some small mapping in China during a business visit (Shanghai, Guangzhou)

I have used satellite pictures from Landsat (in JOSM) and Yahoo (with the online applet) for mapping areas that I know:

In September 2008, I bought a Nüvi 200W. This is a stand-alone unit from Garmin for vehicle navigation. It came loaded with Maps for Germany, Austria, Switzerland and Tschechien. I paid 109 EUR for it.

The first thing I did was loading a routable OSM map from [1] onto the SD-card which I put into the Nüvi. And of course I disabled the pre-loaded data from Garmin.

This unit serves two purposes. Firts, having a stand-alone unit that helps me navigating easily. Secondly, checking OSM data for routability. When the Nüvi uses the converted OSM data for calculating routes, it will give me hints about wrong or misleading OSM data. This way I am finding problems in the OSM database that hinder good routing.

After one week of using the Nüvi, I have the following observations:

Here are the URLs for using several map sources in Maemo Mapper:

I am mostly using a RoyalTek BlueGPS RBT-3000 Bluetooth GPS receiver. This unit has built-in memory for storing track data. The unit is very reliable and has served me well for two years.

Bought in 2006.
A few months ago, I also bought a Amaryllo Trip Tracker (Bluetooth) from Amaryllo.

This unit stores track data onto SD card. The Trip Tracker has the problem that it does not work with all SD cards.

I finally found a 512MB card from Kingston that works fine with it.

Overall, I am not content with the receiver sensitivity. It happens a lot, that in city canyons my old RBT-3000 still records a usable track when the Amaryllo already has lost the satellites and stopped logging. I am not using this GPS for OSM anymore.

Bought in Apr-2007 for 109 EUR.
I bought this GPS receiver to replace the RBT-3000, which does not have good receiver sensitivity.

Bought in Aug-2007 for 41,20 EUR (eBay)
I am content with my WBT-201, but I have read that the i-Blue 747 allows full flexibility in determining which GPS values get logged into the memory of the device. This is why I bought this GPS even though it almost duplicates the functionality of the WBT-201.

When I am out mapping, I have the APC mobile power pack with me. With its USB connector, I can re-charge my GPS and PDA. The power pack itself gets charged via the small USB connector.
Link to manufacturer page: www.apc.com 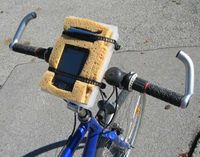 I made a holder for my bike, which holds the Bluetooth receiver and my Palm OS handheld in place while riding my bicycle.

The holder provides shock and vibration protection and can easily attached and detached from the handlebar.

So far, it worked nicely for my mapping trips.