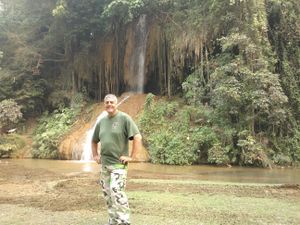 I live in Hereford in the UK, but spend the winter months in Chiang Mai, Thailand, owning motorcycles in both countries. Most of my travel is in Northern Thailand and Laos, both both on and off road. I'm 61, retired, and during the "quiet periods" in the UK, this allows me time to contribute to OSM.

Originally I used a Garmin Zumo 400 to record trackpoints. It worked well on a motorbike (where I do all my mapping) but one drawback is that it does try to "snap" the waypoint to the nearest road, and although you can't turn this off, you can change the background map to OSM or blank, to avoid copyright infringement. It also had a number of other disadvantages such as the seemingly random manner in which it archives tracks, and a tendency to shorten tracks by ignoring points, resulting in very square shaped curves at times. I have since bought a DG-200 Datalogger, (£30 from eBay) and this works extremely well. It gives a much higher resolution than the Garmin, and of course, acts completely independently of any loaded maps.

I use Potlatch for my edits. It suits my level of experience, and to learn to use a new editor now, would just not be productive. 'Im very grateful to Richard Fairhurst & the OSM foundation, for investing the time & money into the creation of the latest version, "Potlatch 3".

I started putting some UK rights of way in the OSM as I had old GPX files, then updated nodes where I had local knowledge. After doing an off-road tour in Thailand, I wanted to put my traces on OSM so I could use again, but then when I realised how much other stuff was missing in rural areas, I used the Bing imagery to update. So far its mainly roads, rivers & lakes I'm concentrating on. And Yes, Armchair mapper is probably a good description, although I do concentrate on cities where I have my GPS trace to validate the imagery first. I have seen OSM grow in Thailand, and am proud to part of this. However, recently I have become very disillusioned about the worth of our manual edits when I see the manner in which the Thai map has has been polluted with contributions from less conscientious and inexperienced sources. These include the young travelers who use Maps.me as a sort of notepad, a Company employed by the Grab taxi conglomerate that invent roads, and a Facebook team who's mandate was to prove the worth of their Machine learning technology.