From OpenStreetMap Wiki
(Redirected from User:SteveC)
Jump to navigation Jump to search 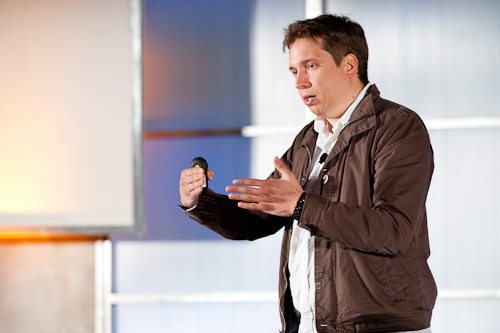 I'm Steve Coast and I started OSM. Chairman of the OSM Foundation, co-founded CloudMade and I'm one of the System Administrators. I'm mapping San Francisco and maintain OpenGeoData, a blog about open map data and of course OSM.

My relationship with OSM

Of course that's only a fraction of the story. As Neal Stephenson points out in the Diamond Age, it's the most difficult thing in the world to get educated westerners to pull together and you need to pull together to have any lasting impact or let your memes carry on. Without the help of a lot of key people, some now forgotten, OSM would not be here. There was Imi who wrote the first versions of JOSM, Mikel who coded the 0.3 OSM homepage (IIRC) from a sketch by TomC. Tom also put together the first pretty applet for OSM and has been a big cheerleader together with the cool kids at Stamen. RichardF writes Potlatch. Many, many people made the last SOTM a great success and the volunteer and 'team' board members make big impacts on a daily basis. Frederik and Jochen wrote the OSM book. TomH, Grant and Matt make the servers tick these days... this can go on and on. Without all these people and more we'd be dead in the water.

As is hinted above I see my role as staking out new ground, setting direction and then handing off to people better able than me. For example I used to write all the code and host all the OSM servers. I handed these off to people super competent to do them. I used to run all the mailing lists. I used to, long ago, maintain the applet editor, now we have Potlatch. I used to spearhead the license effort, now we have a team of people which includes me. I was critical in getting the first SOTM off the ground with Andy, 80n and Nick. Last year we saw an awesome team put together SOTM '09.

Which is certainly not to say I'm always right Just look at Segments for example! (An old data structure we no longer use.)

OSM and OSMF will continue to have to stake out new ground as we expand the map and the project like this. The Foundation needs better communications, balanced with the fact that we are volunteers. We need paid staff to alleviate this issue and others. The license process is not complete. Local chapters will help scale the project across the globe. Commercial support such as we've seen from AND (donation of the Netherlands data) and Yahoo (aerial imagery) will continue to be very important.

I see myself as firstly staking out this ground and then getting out of the way so that people better than me can go farm it. This isn't an easy process with so many people and so many opinions. Often it would be easier to roll over or listen to the 'consensus' even when it's clearly wrong. For example I was and am often annoyed that Potlatch, our flash-based editor, is the result of basically one author. This isn't healthy in an open source project with an esoteric programming language and strange implementation idioms. Does this mean I hate RichardF, the author? Of course not, Richard is super critical to the project and I have a huge amount of respect for him. Does it mean I have time to hack on it? I tried once. But that doesn't mean I should stay silent on such a key topic, even if my rhetoric sometimes strays outside of the box. Potlatch is now moving much more toward having a team of people behind it with or without my comments, and that's great. It would often be easier to stay out of things like that or keep my mouth shut, but I believe we've made much better progress by being bold, open and honest about our strengths and weaknesses. It's driven the project to the success we have today.

This carries through directly to the projects philosophy on coding. Code is king. Code is what makes the project tick. Ideas are great but ideas are cheap. Implementation is expensive. Thus we should put resources behind the people who are proven to do the actual work required to make the project fly.

Concretely, what do I want to do?

A lot of what I do today is done in the background. On a weekly basis I do many interviews and push OSM in the media, such as this recent FLOSS weekly podcast. I spend quite a bit of time just explaining what the project is and how it works to journalists, influencers, companies and non-profits. I act as a hub a lot of the time, in the background connecting people. For example some guy the other day wanted to hack on JOSM so I put him in touch with Frederik, and some other guy was interested in the OSM logo copyright so I put him in touch with Matt. Many, many people can't or don't use tools like this wiki to find information like this and require human contact to go forward.

Relationships with companies and people who have donated to us, such as aerial imagery or major media sponsors, are incredibly important. In many ways they keep the project afloat with a constant stream of data, contacts, media attention, people and ideas. It takes time and energy to keep these going and I'm super lucky to be able to do it. These things don't work on the mailing lists in general, journalists don't go to the lists. Companies don't.

I want to carry on that work, and gradually expand out the responsibilities of others in the OSMF and in the community to take it over just as other aspects of the projects have been.

There are concrete actions I could point to. For example we need better communications and a better OSMF website. I could be more concrete than the other manifestos and state we will replace it with a nice wiki by the 1st of January, or something. But, as I am seeking to not only be a board member but be Chairman it's important to not stomp around on everyones input, ideas and passion. Community consensus from the mapper on the ground through to the license working group and up to the Foundation is what will make it fly. Direction moderated by consensus and knowing when to listen and when to move on. We've had a fantastic set of experience and skills represented on the board and I'm sure we will in 2009/2010 and so giving room for that, the set of wisdom of the crowd being better than the individual, it's important just to get out of the way of it and let it work.

My main aim, as ever, has been to make OSM the best map on the planet. And I believe it will be, with your help.

So, I will push for more and clearer communication from the OSMF. I will pour more energy into helping the license process complete. I will push more broader and more inclusive OSMF membership and participation, especially beyond the English speaking world (as I have been). The rollout and formalisation of the working groups is important to me, as it shares out the load and gives the Foundation the bandwidth it requires to function. And last but by no means least I deeply want the Foundation to have the finance and paid staff to give it much more throughput on day to day issues and administration at minimum.

If you have specific questions I'm very contactable below.