My name is toralf. I started contributing to OSM in NOV 2007 after I read an article about it in the German computer magazine c't. Currently My main focus is on the southeast of Bremen, Germany. But also other places I know by heart, e.g. Sindelfingen, Bonn and Harriersand. Due to the lack of an GPS receiver I started by using Yahoo! images to get the ways. After I bought a GPS device I started to map streets more closely, since the satellite images did not show every detail or way. And they are outdated (at least for some parts of Bremen). The tagging I started with pure knowledge, but after doing a thorough survey in Hemelingen, I realized that a survey can’t be replaced by anything else. There are so many details that one doesn't capture even when he travels that way for years. When doing a survey, you just see the world with different eyes.

Stuff still to do

NOV 19th 2007: Just ordered a Wintec WBT-201, should be here by 21st. Thus gpx tracks are coming soon ... This also gives some use to my old Palm Tungsten T3. Will try to run cotoGPS and TrekBuddy on that PDA.

NOV 30th 2007: After a short vacation on Mallorca, Spain, I was able to add several hundred kilometres of streets to that island by using the gpx tracks. And with the aid of LandSat pictures which I adjusted to these tracks I added more details to the coastline of Mallorca. The Wintec receiver worked well and I'm very happy with it. The only bad thing is that I didn't find the time to note all the street names and amenities while driving.

DEC 13th 2007: Did a 1,5 hour bike tour around Hemelingen, Bremen, Germany to get the gpx tracks of all ways. The street names and other features had been gathered previously in November. Now Hemelingen has a good basis. Only small things are missing.

DEC 30th and 31st 2007: Again two long bicycle surveys. This time parts of Hastedt, Hemelingen and Vahr (in Bremen, Germany). For the time being this is the most I will go north or west. In the future I want to progress to the east and south. The only exception might be the Bürgerpark, since at this time of the year the trees are leafless which should enable an acceptable satellite fix for the tracks in this park.

JAN 4th 2008: Drove the harbor area by car to get some missing street names. And found an unnoticed service way.

JAN 16th 2008: Drove 60 km by car in the East of Bremen including Oberneuland. Mostly primary roads and industrial areas.

JAN 22nd 2008: 46 km in 3,5 hour bike survey through the Bürgerpark and missing parts of Schwachhausen (in Bremen, Germany).

JAN 27th 2008: Did some sketching on Yahoo images of water, tracks and tennis courts in Blockdiek, Bremen, Germany.

FEB 10th 2008: Drove around the city Blaufelden (Germany) with my car.

MAR 8th 2008: Did some walking (4 km) in the north part of the Bürgerpark. But trees are dense, thus I didn't got a good fix and the receiver lost track. Additionally I did a 20 km bike tour to finish up the last missing streets in Arbergen.

MAR 10th 2008: Drove around Osterholz cemetery by bike. At least I got all of the bigger roads and paths. But there are still a lot of smaller paths that I didn't catch. Since it started to rain, I sketched some visible roads from satellite images in Mahndorf, Uphusen, Bollen and in between.

MAR 13th 2008: Did a 30 km bike tour around Bremen Mahndorf. I think it covered all streets and paths.

MAR 17th 2008: Another 35 km bike survey. This time through Ellener Feld and Ellenerbrock-Schevemoor. Twice I was in the middle of a small snow storm. Later at night I added some landuse keys around Bremen based on satellite images.

MAR 31st 2008: This was my masterpiece so far. The survey was 72 km long and took 5 hours. But I finsihed up Blockdiek, Ellenerbrock-Schevemoor and Tenever (all in Bremen, Germany). 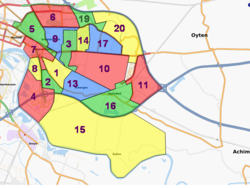 A map of my surveys in southeast Bremen

The slices of Bremen I did a survey on:

I don't have a picture of the OSM map when I started to contribute, but 2 month and 4 surveys later when parts of Hemelingen were already added. It is from JAN 2008. The second picture is the OSM map as of SEP 2009. When you compare the two pictures you can see how much has been added over time. Of cause this was done by several people, not just me. :) Due to the lack of satellite images the landuse is not added further to the east. 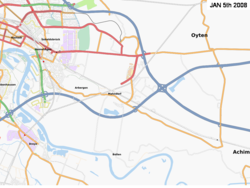 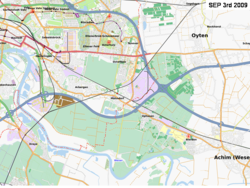 How do I do the surveys 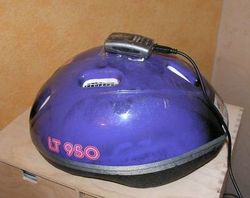 To get the gpx tracks I use a Wintec WBT-201. Its battery charge lasts longer then a day full of survey. And its capacity for gpx tracks will hold for more then 30 hours of survey. To get a good satellite fix I mounted the receiver on my bike helmet, see picture. The button to create a waypoint can be easily found without looking at the device and the plug for the USB cable is accessible while mounted. The Wintec WBT-201 can be adjusted to take a gps position at different time intervals depending on the speed traveled. My personal settings are given in this table. I have found them to be robust regardless of how fast I travel, either by foot, bike or car.

The reasons for this setup:

Before I start a survey, I print the OSM map of the area I will go to. Usually the major streets are already mapped and serve as landmark for the survey. (If these streets are not mapped, I mapped the streets by car beforehand.) On the white space I sketch the streets I know by heart or by looking at Yahoo! Aerial Imagery with their approximate positions and add as many details as I know. This has become best practice, since it saves me several minutes on the bike drawing and keeps my drawn maps from getting out of proportion. Some may laugh at the “saving of several minutes”, but on a survey by bike at -2°C you’d be glad to stay moving.

To draw the missing details on this map during the survey I use a clip board that fits nicely under my bike tricot during cycling. I have found that pencils are the best to draw. The reason is that pens do not always draw a line when exposed to freezing temperature or when held upside down for a while. Additionally I can draw more details with a pencil then with a pen due to its smaller thickness. To have a constant thickness I use a propelling pencil of 0.5 mm. During cycling I slide the pencil up my tricot sleeve. Due to one accident (and a drop of that pencil) where I lost most of the pencil lead I also carry a standard pencil up the other sleeve as a precaution. You don’t want to interrupt your survey only because you have nothing to write with.

Equipped like this I plan a rough route and start to cycle in the middle of the streets. Since these areas are mostly residential this isn’t a problem. In the case that there is traffic I’ll just wait for a free time slot. During cycling I look for POI and street properties and their names. A short push on the button on my head-mounted-device marks the POI positions. At the end of the street or the next junction I draw the details on the map. In some cases I also managed to memorize between 4 or 5 POI before I had to stop and draw them down. Recently I started to use my palm to voice record notes. For this I'm wearing the palm on a short leash round the neck.

For most POI and properties I have a set of shortcuts and icons to draw on the map. If the streets are too short to draw the names directly next to the line or the POI are to close to each other I’ll mark them with a number and pin down the name and properties on the side of the map. There is only a certain number of POI I currently map. These are

As for the way properties I try to map/tag as many as possible. The rest of details I leave for residence to add at a later time.

Back home I use JOSM to preprocess the gpx tracks. After opening them, I download the already existing OSM data and gpx tracks into new layers. After that I change the color of my gpx tracks to pink. Now with these highlighted tracks I can easily add all the ways as a first step. When all the ways are drawn I start to tag the ways and add the POI. To tag roads I have a customized tagging preset that allows me to set multiple keys at once.

I found it to be very helpful to use the Validator plug in afterwards. It helped me to find some wrongly tagged items and good way to check your data.

After I uploaded the data to OSM, I also upload the gpx file to the server.