Sherwood Park roads are mostly mapped out, along with most of the road grid in the county. Still need to get GPS tracks for all the rural subdivisions that are outside of the Yahoo Imagery.

Have been mapping out highways between Edmonton and Fort McMurray, as well as adding roads to Fort McMurray little by little. Also mapped out some highways to Camrose, Edson, Rocky Mountain House, and into the foothills.

Traced out Millwoods roadways to get that area filled in a little as there were no local users taking on the task.

When trying to capture the outline of a building, many people try to just walk around the building. This usually results in less than stellar results. Being close to a building can block the GPS receiver's view of the satellites, reducing accuracy of an already less than perfectly accurate device. By moving away from the building, you can get a better sky view, and better accuracy, but how does that tell us where the building is located?

Walk away from the building, but line yourself up along the wall. Look at the building wall, and get yourself in line with the wall so you can see the far corner and the near corner right in line. Capture that GPS location. Go to the opposite end of that same wall, and walk away from the building again, keeping lined up with the wall. Capture that GPS location. If you put those two points into your OSM editor, you can draw a line between them that will define the plane of the measured wall. You can't determine where the corners of the building are, but you know where the wall should be. 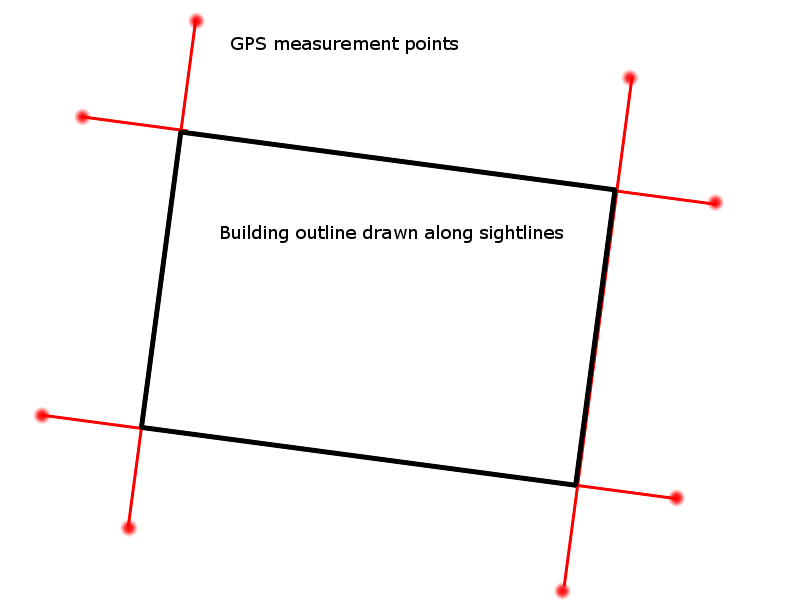 Measure enough points to define the plane of all 4 walls of a rectangular structure, and you can create the rectangle that defines the structure within those 4 planes.