This is a past event which took place in September 2007

OpenStreetMap - coming to a street near you, this fall. Proprietary data has no-where to hide. 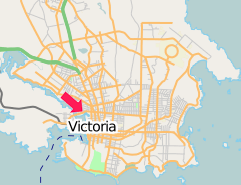 Due to popular demand, the dates of the mapping party were extended. Saturday 22nd, Sunday 23rd and Monday 24th September and also September 27th following the FOSS4G wrapup

Who Can Map/How to Map?

Almost anyone can map with OpenStreetMap. Victoria will provide an interesting mix of mapping opportunities. Urban areas are extremely data rich, meaning that there is a lot of stuff to map. We also have very good satellite imagery coverage from Yahoo! for a large part of Victoria. This means that having a GPS unit won't be necessary, but will still be useful if you have one.

A good plan for the weekend would be to meet up on Saturday morning, and decide which areas of the city each person would like to map. After that, we can head out and use print-offs of the Yahoo! imagery and existing OSM maps to mark street names on. Every couple of hours, mappers will probably want to stop off and transfer the information that has been collected and noted on paper to OSM's database.

This image suggests some areas that individuals or groups could tackle. Splitting an area into regions helps mappers to concentrate on a specific area and helps to stop duplicate mapping (different people going down the same street)

If you want to use your own laptop, you will need a program to talk to your GPS, get the GPS tracks and convert them from whatever format the GPS uses, to GPX, the format that is required by the OSM API. Many mapper use GPSBabel - an open source utility that will run on most platforms. You can find more information about GPSBabel and other similar software here.

Please, provide newbies with details about useful software to install and configure on laptop/PDA.

Canada:British_Columbia:Victoria FOSS4G2007 - The Open Source Geo conference is being held in Victoria between the 24th and 27th September, 2007.