The import webpage can be found at http://crab-import.osm.be. It contains a way to query the addresses in Flanders per postal code and per street.

Next to that, the site also offers the possibility to compare CRAB data with OSM data, to see which housenumbers are still missing, or where there could be mistakes.

In this document, we explain the webpage section per section.

The comparision options allow you to control if and how the data from CRAB and OSM is loaded and compared. When you edit one of these options, you always have to reload the page by clicking the "update" button.

Because you can't just compare all 2 million addresses of Flanders, you have to restrict yourself to a postal code. If you don't know the postal code of the area you want to map, you can check the site of bPost.

This field lets you filter only a limited number of streets. You can enter a complete name (like "Dorpsstraat"), or you can use a wildcard (*) to load multiple streets (f.e. D* to load all streets starting with a D). By limiting the streets, the page will load faster, which may be interesting in big cities.

When you enable this option, the address data will be downloaded directly from OSM and compared with CRAB data. This option is really necessary when you're working in places where a lot of addresses already exist (to see which are lacking). But you can also choose to omit the comparison, which will make the page load faster.

The data comes directly from Overpass API, and thus it takes some minutes before the data is available after you uploaded it to OSM.

When you enter a distance here, the distance will be used in the comparison. When addresses in OSM and CRAB match, but the distance is bigger than the maximum you gave, then the addresses are seen as non-matching after all.

Sometimes, a CRAB position isn't very precise. So a difference of some 30m isn't too rare.

These options change how the data is exported to JOSM. The options are immediately active (you don't have to press the "update" button to activate them).

With this option, extra information from CRAB will be loaded. You can use this option to study a certain point, but this CRAB info shouldn't be uploaded to OSM in any case.

The extra info shown is:

Include municipality and postcode

With this option, the apartment and bus numbers from CRAB will be added in OSM under addr:flats (use the option "include CRAB info) to see the actual source of the info).

Do watch out, the notation of apartment and bus numers isn't standardised at all, and because of that, there are also more mistakes in that data. If you activate this option, you'll also have to check every address to see if the numbers seem logical, and survey it in case of doubt.

Since the apartment numbers aren't hard to add later on (can be automated when there's a good data source), adding it now isn't really necessary.

The data section contains a table with all streets, and info about those streets (total number of houses, number of wrong housenumbers, ...).

The table is also interactive, and can be used to load data in JOSM (with JOSM activated and correctly configured).

The map is comparable to the table, but offers a different overview.

When the OSM data is loaded, the markers will get a colour-code (from red to green in 10 steps). This way, you can estimate how complete an area is.

When you click on the balloons, you'll see the same info as in the table, and the links work similarly. 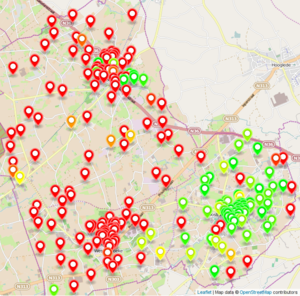 Showing a municipality where a part has been mapped, and other parts not.

When the data is loaded in JOSM, there's a possibility you see a warning as a fixme=* message. Here's an overview of the possible messages and their meaning:

Note that the messages are not exclusive. So some address node might have multiple mistakes and show multiple messages in one fixme=* tag.