From OpenStreetMap Wiki
< Witham
Jump to navigation Jump to search

There was a mapping party in Witham held jointly with Mensa in April 2010.

Coffee available from 09:30
10:00 An introduction to OpenstreetMap
After the introduction, go mapping, or stay and use the promised wifi to demonstrate OSM uses and methods to any interested attendees.
12:00 to 12:30-ish, lunch break starts. If dining at The White Hart Hotel you may need to order in advance depending on numbers attending (both OSM/Mensa together).
13:30-ish to 14:00-ish - head out mapping again, or stay and demonstrate uploading the collected data
14:00-ish, brief interlude for Mensa regional meeting (the formal stuff to be kept as short as possible).
15:30-ish to 16:00 - clearing the room. Call in to say goodbye or map until you head home.

RSVP: please let us know that you will join us by adding your name here (use * ~~~).

Although a residential landuse area has been added for Witham, very few of the roads have yet been added. Checking the nonames layer also shows that most of the roads currently mapped are lacking street names.

As an introduction to OSM Witham therefore lends itself to both GPS mapping to add missing roads and paths, and walking papers to add missing road names and POIs (and noting names of unmapped side roads which if not mapped with GPS can at least be added with a FIXME tag).

It is believed that there is also a shared use cycle/foot path running parallel to an ever increasing length of the A12 which is currently unmapped. Some of this might also be mappable.

The above diagram was created in January 2010. If Attendees want to reserve an area add their name to the list below the image. The numbers have been assigned fairly randomly and don't represent any sort of priority, except that the numbers covering the existing Witham landuse areas are most likely to have more roads to be added than those surrounding the town. 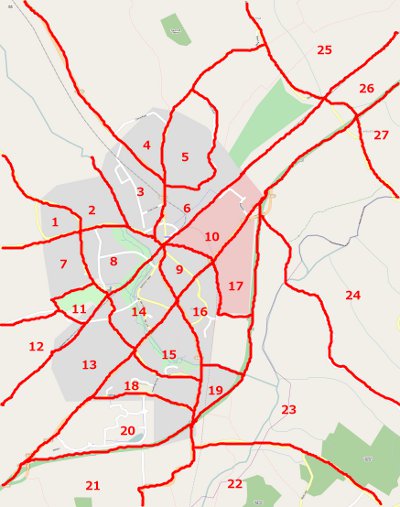 Please feel free to suggest locations and goals for this mapping event as well as future events.