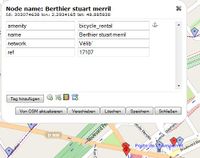 The OpenStreetMap Amenity Editor (http://ae.osmsurround.org/) was a simple online tool to create and modify nodes (including points of interest, POIs) on OpenStreetMap. It allowed the user to quickly insert new amenity information into the map and came with a palette of template amenities with recommended and/or often used key-value tag information. Missing information, such as opening times or addresses, could easily be entered by the user.

From February 9th, 2013 to November 16th, 2016, Amenity Editor remained 32-bit and was incompatible with the now 64-bit OpenStreetMap, which caused many nodes edited by Amenity Editor to be accidentally thrown random, enormously vast distances (some even thrown into other countries that are very far away from the original location). [1] [2]. For example, one church was thrown from somewhere in Morocco all the way to somewhere near the Volga River, in Russia. Eventually, the OAuth for Amenity Editor was closed down, making it unable to create edits. The problem was fixed in the 13th and second-last Amenity Editor release, 0.94-SNAPSHOT.

There were a total of 14 Amenity Editor releases.[1]

The final release of Amenity Editor was [the unlabelled version 0.96], released on November 16, 2016.

Version 0.96 was left labelled as the previous release "0.94-SNAPSHOT" on the website and never updated.

From Version 0.7 and on the Amenity Editor used OAuth for authorization. 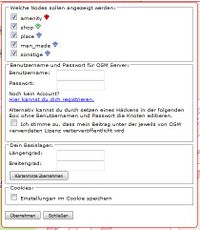 It was written in Java using the Spring framework, plus a lot of client side javascript. It used portions of code from OpenStreetBugs.

The Amenity Editor was developed by nitegate (Adrian Stabiszewski, who also made Relation Analyzer). His website is located at http://blog.opendatalab.de/ (formerly http://betaplace.emaitie.de/).