From OpenStreetMap Wiki
< Antarctica
Jump to navigation Jump to search

This page contains some notes and plans for importing data for Antarctica and for facilitating future community mapping of the continent. It summarizes some of what has been discussed in blogs here and here.

These plans have been discussed at the Karlsruhe_Hack_Weekend_February_2013 and a tagging scheme for the Antarctica specific features has been developed that can be found on Antarctica/Tagging.

Situation before the import 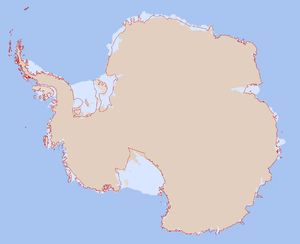 At the moment (February 2013) the representation of Antarctica in Openstreetmap is fairly basic:

In the map on the right you can see the current OSM coastline as a thin red line and the proposed import in beige and light blue.

Since Antarctica is quite different from other areas on earth there are a few general questions that probably should be discussed before an import or large scale community mapping:

Mapping in the normal OSM Mercator projection excludes the southernmost part of the continent. But even further north map distortion can be a serious problem. Using Polar Stereographic (EPSG:3031) projection would be a logical choice. Support for this in common editors would be a great advantage for Antarctica mapping. JOSM supports plate carrée (EPSG:4326) and thereby allows formally dealing with data up to the pole, for example for imports but practical manual editing this way would be a very bad idea. An alternative is to do the actual mapping in a separate program supporting other projections (like Quantum GIS), convert it to EPSG:4326 and upload it using JOSM.

There are some issues that could cause problems with use of varying coordinate systems during mapping as outlined in a blog post.

Rendering in polar stereographic projection - although being optional for the mapping itself - would probably much help Antarctica mapping efforts. Initial tests have shown that rendering in Polar Stereographic using Mapnik is feasible - a map demonstrating that can be found on [1]

Due to the low quality of the existing coastline data the current plan is to replace it with an import from MOA. This source also include data for the ice shelves. The inside of the coastline would default to natural=glacier replacing current glacier data (except for some on islands at the Antarctic peninsula where glaciers have been mapped in more details - otherwise ice on antarctic islands is currently not mapped at all). There is also a small section of coastline at McMurdo Sound which is mapped in more detail based on LINZ data as well as two small sections on King George Island (one with a serious offset though). This will need to be merged with the data to be imported. All other features currently in OSM would be unaffected although their position could require updating (like when a research station at the coasts turns up above water with the new data).

Purpose of this would be to bring the Antarctica coastline to the minimum level of accuracy comparable to elsewhere in OSM coastline data and to create a uniform quality starting point for following mapping activity which could for example be based on LIMA.

The MOA data is derived from satellite imagery with a nominal resolution of 125m so the resolution of the derived coastline data is similar. There are however errors of up to several kilometers in some places due to wrong classification of the images. This is still better than the existing OSM data. Other, more detailed data exists but is not available under license conditions compatible with OSM.

The original MOA coastline from NSIDC is poorly vectorized and needs to be reprocessed before an import. An example for a processed version (with coastline at the outer shelf ice edge) can be found on [2] - this will need to be combined with the shelf ice data.

The following data sets have been produced from the MOA coastline data set for import into OSM. Data preparation is going to consist of the following steps:

The ways are going to be tagged source=http://wiki.openstreetmap.org/wiki/Antarctica/Import_2013 for the import.

The manually modified data can be downloaded for review from [5]. The following manual modifications have been made:

As outlined above most of the existing Antarctica data in OSM will not interfere with the import. The actual import is planned to be done in the following steps. As you can see we plan to separate the import of data for the main land mass and everything collected to the ice shelves from the import of data for the separate islands. These steps will be done using a separate user account (MOA import) only used for this one import.

Following the import or parallel to it the following steps would be important for future community mapping of Antarctica:

All of these would also be useful for mapping the northern polar region.