A number of structures associated with avalanche protection may be encountered in mountainous areas. Currently (2014-01) mapping of these structures is limited.

The main structures are:

This page attempts to summarise existing tagging schemes for such structures, and where necessary suggest extensions. Tags currently in use include:

There is clearly scope for overlap in the tagging of protective structures for controlling snow, avalanches, rock-fall etc.

Avalanche fences come in a range of designs: probably the most popular over the past 50 years is the so-called "snow-bridge". These consist of several metal 'rails' supported by cross-members and held by metal or wooden struts at an angle to the ground. Snow accumulates on the metal rails. Usually several are used together to ensure that snow accumulation will not lead to sliding in the zones between the avalanche fences. In certain areas whole hillsides may be festooned with these defences. In other places they are situated to protect roads or ski pistes and installations. 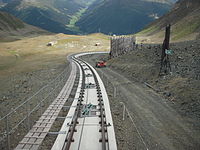 Snow fences are not strictly avalanche protection. They are not braced to support heavy loads of snow. In the main their purpose is to redirect snow accumulations either to improve collection of snow on ski pistes, or to prevent drifting snow interfering with roads, railways or other installations. Some may play a role in avalanche protection by being placed down the slope to prevent snow plaques building in certain areas. They may fulfil some small part as a passive defence by re-directing initial flows. 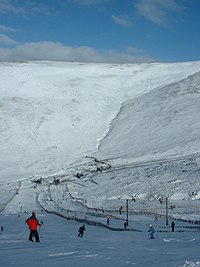 Snow fences beside pistes & ski lifts at Glenshee Corie Fionn. The fences serve to consolidate the relatively sparse snow cover where it is wanted

Snow fences are widespread in North America in the mid-West where drifting snow is a far larger hazard to road safety than avalanches, for instance this communication from MNdot.

The isolated valley of St. Antönien is notoriously avalanche prone. The medieaval settlers (Walsers) developed a distinctive means of protecting their houses and barns. A substantial earth berm re-inforced with stone walls was build on the uphill side of any building. Usually the structure was shaped like an arrowhead and was thus designed to divert the flow of avalanches around the site of the buidling. Additionally the building roofline was continuous with the back of the berm ensuring that very large avalanche flows would pass directly over the house (see illustration). As far as I (SK53) am aware this type of structure is restricted to the St Antonien valley. I have experimented with tagging these as man_made=avalanche_protection avalanche_protection=berm. This structure is known as a Lawinenkeil in german see Lawinenverbauung

A useful summary of some techniques here

The CatEx (IIRC a contraction of CATenary EXplosives) system involves small aerial cables capable of supporting a load of a few kilos. Small explosive charges are attached to the cables and maneuvered into position before being activated. A single cable system can therefore allow detonations in multiple positions across a dangerous slope.