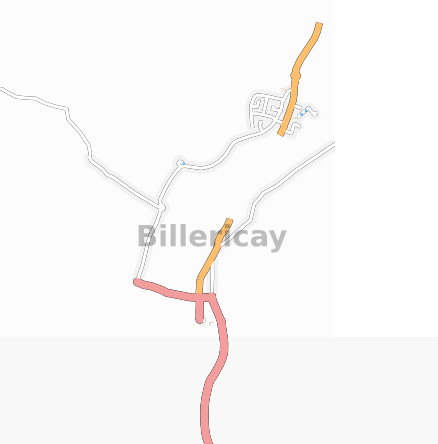 A screenshot of the slippy map on 20 February 2007, showing the initial roads.

Billericay is a semi-rural town in the Basildon district of Essex in the East of England region of the UK. It has a population of 40,000.1 The settlement lies along the B1007, which is called Stock Road for most of its length in the town.

The main named suburbs are Queens Park in the northeast, Sunnymede in the west, Tye Common in the southwest and the largest, South Green, to the southeast. The area to the northwest between Stock Road, Norsey Road and Mayflower school are Bridles Eastate and Norsey Farm Estate. The Bridles Estate is a mix of residential roads and residential footpaths with private garages to serve houses without a private drive. This network is served by Brookside and Bridleway through roads which both connect to Potash Road. Norsey Farm Estate is mostly residential cul-de-sacs leading off Mercer Road which runs from the Bridles Estate to Norsey Road.

The industrial estate is off Radford Way. Commercial undertakings are mainly sited between Radford Way and the railway and on the higher levels of buildings down the High Street.

An estimated 42% has been mapped using GPS, of which virtually all has been interpreted into ways i.e. roads, footpaths, parks. Nearly all the ways created from these traces have been tagged to give them names, although names of parks and school do not always appear on the slippy map. Features, e.g. post boxes, bus stops etc are included in the mapped areas more often then not. Mapping continues of the remaining areas.

Areas still needing to be mapped

Initially, around the 18th of February 2007, this user began to map the main routes and town from the north, as shown in the first screenshop of the map above.

By the 1 March, Stock Road and the Bridles Estate were fully mapped and the train line was begun. An area referred to as Arundel Heights was also mapped. A few days later, by the 5 March, most of the area enclosed by Stock, Norsey and Potash Road was complete.

The North of the town, to the east of Perry Street and Queens Park Avenue was almost completely mapped by 15 March.

Section can be edited at User:Ksbrown/Billericay landmarks