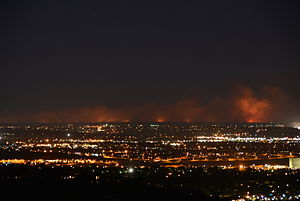 At this time we're 'calling' the response phase over. Other fires/mapping events should take priority for remote mappers. Thank You!

Almost immediately, several Colorado based OSM contributors began editing the area in and around the Black Forest Fire. Mainly fixing up the road network, which was almost entirely untouched original TIGER import, some of this work remains on the outskirts of the fire area as well as lots of the USA; see TIGER fixup!

Some very rough landuse polygons were thrown onto the area to demonstrate the 'area of concern', this has since been cleaned up.

Response Coordination: Some discussion on the HOT and talk-us lists occurred and it was determined that no response via the OSM-US Foundation or HOT activation would occur due to the great work of local and remote mappers. While mapping was underway, several other large wildfires began, and coordination was scaled up to 2013 Colorado Wildfire Season.

It could be possible to feed in some information on post-fire / live updates of burned forest areas and destroyed/damaged buildings, which of course will be different from what we see in Bing imagery. Please add any imagery links/services and instructions to use them in this wiki (As usual, only imagery that is compatible with licensing, etc.).

The OpenStreetMap - Colorado group discussed how to handle mapping the after fire 'scene' and it was decided that we would use Building=destroyed or =damaged once imagery is available (or other data collection methods). We took into consideration many factors, and believe that the historical value of leaving building outlines, etc. would be preferable to deleting them. Until further notice, please do not delete any structures, and be cautious to change any natural/forest polygons as they hold value, as is, until imagery/survey for their new structure is available.