The TIGER data imported in 2007 serves as a great foundation for the mapping of highways, railways, and other significant map elements in OSM. However, the imported elements had various mapping and tagging inaccuracies. These inaccuracies do not reflect their real-life counterparts and must be fixed.

All TIGER elements were imported with various TIGER source tags and the signature tiger:reviewed=no tag. An OSM element from the TIGER import is considered "fixed" when the tiger:reviewed tag is removed. See Review to determine when you should remove these tags. There is no consensus at the time.

Each TIGER element has a set of standardized attributes. These attributes were then converted to related OSM tags for the import.

Some of the original tags are not as accurate as OSM tagging conventions. Therefore, they need to be fixed.

Most highways imported from TIGER were classified as highway=residential. In many instances, highway=residential is not the most appropriate tag. This problem is most common in areas with little editing since the TIGER data were imported and/or in rural areas.

OSM typically has three highway classifications (tertiary, unclassified, residential) where TIGER had one class (A40 group, especially A41).

Tag incorrect highway=residential ways as rather:

Tertiary and unclassified roads are assumed to be paved in Western countries, so make sure to add a surface=* tag if the road is in fact unpaved.

In the TIGER database, road names are in uppercase, so to indicate mixed-case names, TIGER adds a space. For example, "MacDonald Street" was imported as "Mac Donald St" in TIGER and remains that way in more recent TIGER overlays. Mixed-case names commonly occur with prefixes such as "Mc", "Mac", and "Van". TIGER uses only A–Z and 0–9 in road names, so apostrophes become spaces ("O Toole Avenue" instead of "O'Toole Avenue" or "O’Toole Avenue"). Likewise, French and Spanish diacritics, such as the ñ that is standard in California, are stripped off ("Canada Road" instead of "Cañada Road").

Use street-level imagery to confirm the signposted spelling. If a mapper has changed the spelling since the TIGER import, ignore the spelling in TIGER.

Other tagging problems include:

The mapping, or geographic placement of OSM elements from the TIGER import, is incorrect due to a variety of inaccuracies from the initial TIGER data. 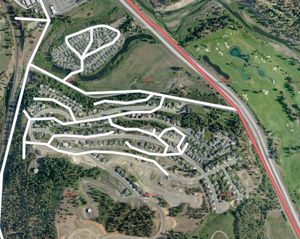 In general, alignment is pretty poor

Probably the biggest problem with TIGER data is that they were originally created for taking census surveys, not for making maps. This means that in many areas the roads aren't aligned with their true position, but if you imagine the TIGER database as a sketch for people walking around with clipboards, then it has all the roads laid out roughly correctly. The work then needed is to drag everything into its correct place and add more nodes to smooth out curves.

See TIGER fixup/Alignment for how to fix, and a list of counties with widespread problems. 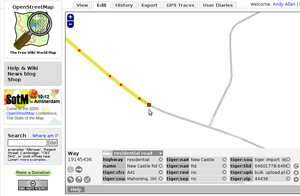 The majority of county border connectivity errors have been fixed, including partially overlapping ways.

In many instances, ways crossing county boundaries may stop at one side of the county border, when they continue into an adjacent county, or the gaps in the ways at the county border are so large that simple connectivity checks will not identify them. Visual inspection of county borders may still identify these sorts of errors.

There are particularly serious data problems along county lines, where different TIGER datasets were imported.

The main problem is that each county import didn't "know" about adjacent neighbours, so they created duplicate nodes where the end of a road meets the start of its continuation (or "twin brother") from the next county. This affects major highways and prevents Routing between counties.

Other problems include overlapping roads and border ways - for example, when a road runs along the border it will have been uploaded twice in exactly the same place - once from one county and once from the other.

Connect ways that have disconnected by county borders. Delete overlapping and duplicate ways.

See TIGER fixup/County borders for how to fix. 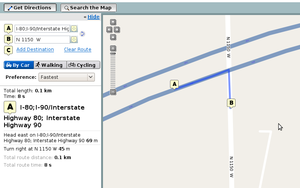 Routing from a freeway onto an overpass - HOWTO fix this

The original TIGER data had no concept of whether two ways are connected or not, so that was all synthesized during the import into OpenStreetMap.

Grade-separated ways, or roads or railways that go over each other at different heights, are sometimes connected. This causes problems when routing and reflect intersections that do not exist.

Remove the nodes shared by the two disconnected ways and specify their respective level=* along with adding any bridges or tunnels.

See TIGER fixup/Over Connectedness for how to fix.

Many Interstates and other major roads only have one carriageway (highway) in TIGER, when in reality, they have two one-way carriageways ("divided road" or "dual carriageway").

Create another way representing the highway in the opposite direction and align each of them to the centerlines of their roads. Add oneway=yes for each and verify their directions.

See TIGER fixup/Divided roads for how to fix.

Before running 'simplify way' in josm on a TIGER-Imported way

After running 'simplify way' in josm on a TIGER-Imported way

Highways in some rural areas were imported with many nodes.

There is currently no tool to simplify ways in iD.

The vast majority of these have been fixed. 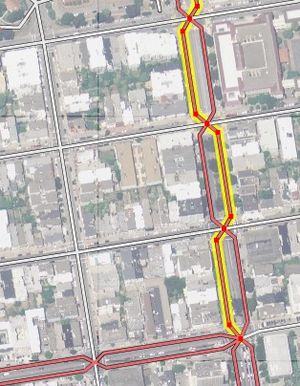 Some streets in the TIGER upload were "braided", where the one-way highways of a dual carriageway criss-cross back and forth across each other, sometimes going in the wrong direction for the side of the street on which they run. The ones that were identified shortly after the upload were fixed using the osm-unbraid tools.

"braided" refers only to the situation where the ways are indiscriminately on the wrong side of the street for their direction. It is a reasonable and well-used technique to bring the ways of dual carriageways back to a single point at intersections to facilitate and simplify the mapping of control devices and turn restrictions. In other words, you may see situations that look similar to the picture, but are correct because the ways both stay on the correct side of the center divider between intersections. In all cases, like any other edits in OSM, be careful not to lose any existing correct data contributed by your fellow mappers.

Split the braided ways at the nodes where their actual direction changes. Use oneway=yes and verify the direction for each way split.

Other mapping problems include:

Fixing and reviewing the elements and their tags that were part of the TIGER import is an important step in ensuring the quality of the OSM database. Once all of the TIGER elements are reviewed, the TIGER fixup should be considered complete.

The choice as to when to remove the tiger:reviewed=* is ultimately up to the mapper. Following this article alone, one can remove it when no problems cited are present and the information of the road is up-to-date.

Local knowledge, street level imagery (road signs), county/city documents and, most-recent TIGER data, or an on-the-ground survey could all be used and tagged as a source=* to confirm that the road is up-to-date.

Many of the imported tiger:* tags can be deemed as necessary.

Removing them could be classified as part of the TIGER_fixup, however, it is not recommended to remove them. See TIGER to OSM Attribute Map

Reasons for removing or keeping them can be found here, or here.

The tags present on OSM data no longer consistently match the data that was initially imported, and updated data is available directly from Census. Many mappers believe it is fine to delete them all and even recommend doing so. Some people keep a few of them.

In JOSM, unreviewed TIGER data (that is, with tiger:reviewed=no) used to show up with a yellow-ish background. It no longer does. This feature is still available as a mappaint style available here

Other handy fixup plugins include the WayDownloaderPlugin.

In Potlatch 1, you could choose to "Highlight unchanged TIGER data" (in the options dialogue). This would give a pink border to roads which have not been changed since the initial import. Again in Potlatch 1, if you hovered the pointer over a way where the tiger:reviewed tag is set to "aerial", the name would be followed by a *.

osm.cycle.travel shows unreviewed rural residential roads (in blue) that have been ridden over by Strava users, implying that they should be reviewed

See the TIGER 2012 page for details of a tile set which you can load in as a background while editing.

You can jump from one slippy map to another, keeping the same position, with the mapJumper bookmarklet. Two ways :

These old tools were useful once, but are no longer available (could be inspiration for new developments?):

iD and JOSM both discard some TIGER tags on elements that have them and have been edited in some way.

Which tags to discard has been left up to the communities and developers that develop the editors. There is no OSM-wide consensus for TIGER tags yet (Considerations could be used as a proposal).

As of November, 2020, the following TIGER tags are discarded in iD:

As of November, 2020, the following TIGER tags are discarded in JOSM:

In December of 2012, emacsen ran an automated bot to clean up the TIGER abbreviated street names on the Eastern half of the US, along with cleaning up some of the spacing on the Western half of the US. Code at https://github.com/emacsen/tiger-expansion